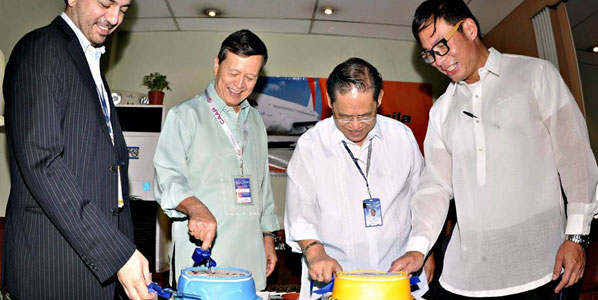 SEAIR of the Philippines, which partners with Singapore’s Tiger Airways, is now stepping into the competitive domestic market at the Philippine capital airport in Manila. The low-cost airline will be the smallest carrier on nearly all of the routes announced so far out of the airport.

The Philippine carrier South East Asian Airlines (better known as SEAIR) can trace its origins back to 1995 but has only recently made an impression in the Philippine scheduled market thanks to a commercial tie-up with Singapore’s Tiger Airways. As a result, SEAIR now operates a small number of A319s and A320s leased from Tiger Airways (a total of five according to the airline’s website). Last year, the airline launched routes from Clark to Bangkok, Hong Kong and Macau (since dropped), and this summer has added international flights to Kota Kinabalu in Malaysia and a domestic route to Kalibo.

On 31 July, the airline finally began scheduled domestic services from Manila with the introduction of three daily flights to Cebu. Four more domestic routes have since been added to Iloilo, Kalibo, Puerto Princesa and Tacloban, with daily flights to Bacolod and Davao starting later this month. 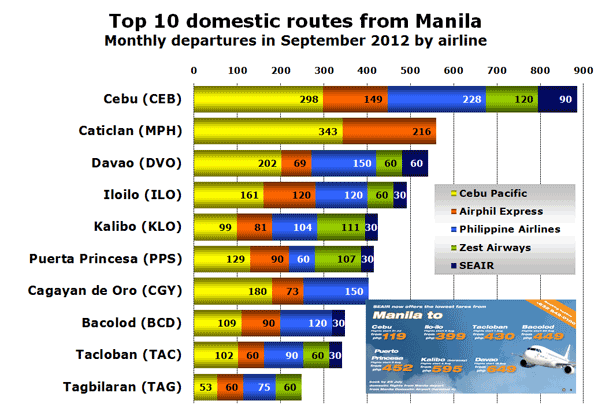 As can be seen from the analysis of Innovata data for September, SEAIR will be the fifth carrier on nearly all of the domestic routes from Manila that it plans to operate. Airphil Express, Cebu Pacific, Philippine Airlines and Zest Air provide competition on all of SEAIR’s new Manila routes with the exception of Bacolod which is not served by Zest Air.

On its routes from Clark, SEAIR faces further competition as summarised in the following table.

AirAsia Philippines only began services from Clark at the end of March.