Capacity at China’s airports growing by 15% this summer, rest of Asia by less than 3% as India struggles

Out of the medals: Indian airport seat capacity drops 5.2% in August, because of Kingfisher’s rapid decline and Air India’s on-going problems, while Vietnam Airlines’ near 8% capacity reduction results in an overall 3.8% decline in available seats for Vietnam’s airports.

Boeing’s recently published Current Market Outlook (2012-2031) predicts that demand (as measured by RPKs – Revenue Passenger Kilometres) in the Asia-Pacific region will grow by an average of 6.4% per annum during the next 20 years, and that by 2031 the region’s airlines will account for over one-third of the world’s fleet of commercial aircraft, up from around 24% at present. So what are the current trends in the region? Which of the leading airlines, airports and country markets have reported the highest growth during the last 12 months based on scheduled seat capacity?

China has five of top 10 airlines and fastest-growing newcomer

Using schedule data provided by the airlines to OAG, a comparison has been made between weeks in August 2011 and August 2012 for all the airports designated as being in Asia. This does not include Australia and New Zealand. Five of the top 10 airlines (by weekly departing seat capacity at Asian airports) are based in mainland China. All of them have increased capacity by at least 5% with three of them reporting growth of more than 15%. There are a further five Chinese airlines in the remainder of the top 30 airlines, including at number 30, Spring Airlines that is also the fastest-growing among the Top 30 (+50.1%), and replaces Kingfisher as the only new entrant in this list compared with our similar analysis made in May 2010. 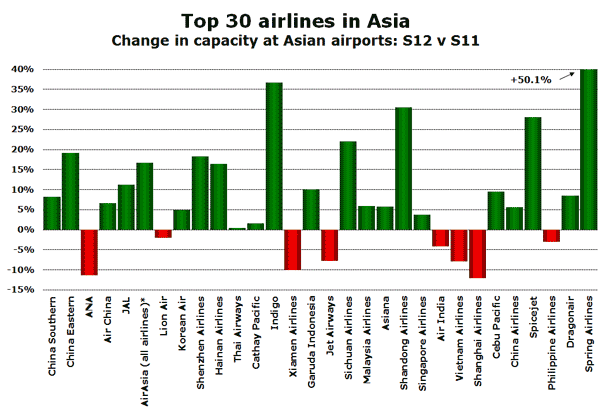 Behind China’s big three airlines and Japan’s ANA and JAL, comes the AirAsia group of airlines (combining the LCCs based in Malaysia, Thailand, Indonesia, Philippines and Japan, but not including AirAsia X). India’s airlines have had mixed fortunes with Kingfisher dropping out of the top 30, Air India and Jet Airways reporting capacity reductions, but IndiGo (+36.7%) and Spicejet (+28.1%) revealing impressive growth.

However, even in China growth is not guaranteed as Xiamen Airlines and Shanghai Airlines were among the eight carriers to report year-on-year capacity reductions among the top 30 airlines in Asia.

Last year, China’s airports handled just over 620 million passengers, 10% more than in 2010. According to CAAC data, passenger growth is just below 10% in the first four months of this year but capacity growth in August is around 15%, higher than for any other country in the top 12 and significantly higher than the 7.2% average across the whole region. In fact, excluding China from the analysis reveals that the rest of Asia has seen capacity growth of just 2.7%. 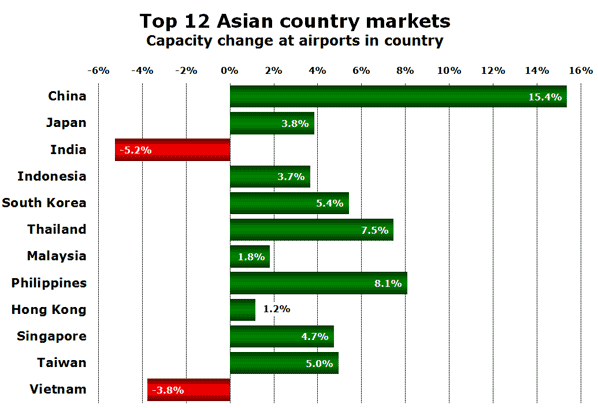 India’s airports are seeing the effects of Kingfisher’s rapid decline as well as Air India’s on-going issues, while Vietnam has been impacted by the reduction in capacity of Vietnam Airlines by almost 8%.

Asia’s top 30 airports account for around 55% of all scheduled seat capacity across Asia, but capacity was up only 5.7% at these airports, while growing 9% on average across all the remaining airports. Beijing continues its march towards world number one status with capacity growth of just over 9% this summer. Among the top 20 airports in the region, only Xi’an (24.2%), Tokyo Narita (+15.9%), Seoul Incheon (+13.8%), Chengdu (+10.5%) and Taipei (+9.7%) reported faster capacity growth. 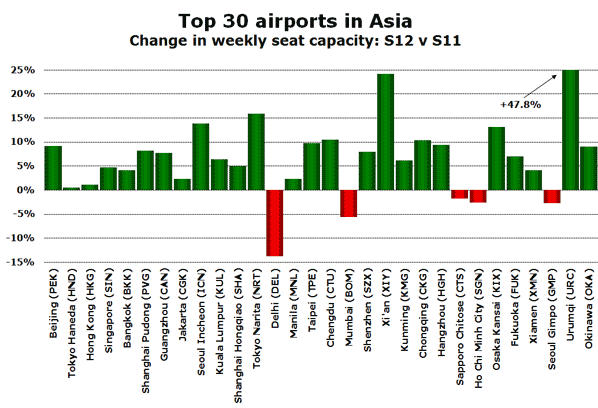 India’s two biggest airports suffered notable declines for the reasons already mentioned. Ürümqi Airport, located in north-west China, is the fastest-growing among the top 30 airports, with seat capacity up almost 50%. Last year, the airport was the fastest-growing among China’s top 30 airports with passenger numbers up 21.1% to 11.1 million, having grown by almost 40% the year before. China Southern is the dominant carrier at the airport.