Southwest heading for 50% of seat capacity at Lambert-St. Louis as LaGuardia and San Antonio are added to network 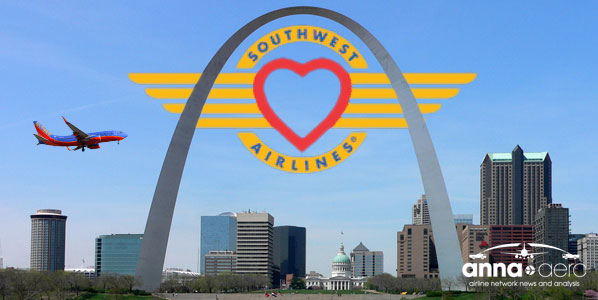 Feeling the Luv: Southwest is now the dominant carrier at St Louis with almost half all scheduled seat capacity and 600 weekly departures. At 12.5 million passnegers, there's still some way to go to get back to the 30 million passengers generated at the end of the last century, when it was a major hub for TWA and then American Airlines.

Southwest is now by far the busiest carrier at Lambert-St. Louis International Airport, and further consolidated this position earlier this week with the launch of two new double-daily non-stop services to New York LaGuardia and San Antonio in Texas. This brings to 35 the number of destinations served by the airline non-stop from the airport that last year saw passenger numbers rise by a modest 1.6% to 12.53 million. This is a long way from the airport’s peak of over 30 million in 1999 and 2000 as demonstrated in anna.aero’s profile of the airport back in January 2010.

Having been a major base for TWA and then American Airlines, Southwest is now the dominant carrier at the airport, accounting for almost half of all scheduled seat capacity generated by around 600 weekly departures.

Among Southwest’s over 70 US airports, Lambert-St. Louis ranks 12th in terms of weekly departures. However, in terms on destinations served non-stop, the airport ranks seventh with 35, beaten only by Chicago Midway (57), Las Vegas (56), Denver (54), Phoenix (49), Baltimore/Washington (48) and Houston Hobby (37). At the end of September, there will be a further new non-stop service to Washington National. 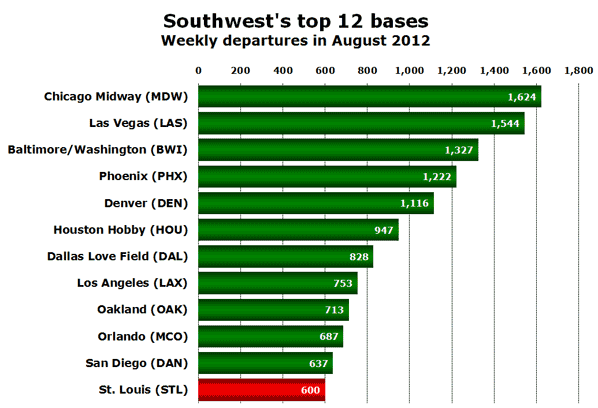 These are Southwest’s first new routes from St. Louis since it launched flights in September 2011 to Milwaukee, and before that to Newark in March 2011. Southwest subsidiary AirTran operates just a single route from the airport to its main base at Atlanta in Georgia.

Chicago and Dallas are busiest routes with most competition

Chicago and Dallas are the two busiest routes from St. Louis for both Southwest and its competitors, with Chicago served by over 200 weekly flights and Dallas by around 120. A total of 12 destinations are served by Southwest with at least three flights every weekday. The only ones of these on which it faces direct competition are Denver, Minneapolis/St. Paul and Phoenix, as on other major city routes Southwest serves a different airport to those of its competitors. Southwest’s new route to New York LaGuardia will see direct competition from American and Delta, who both operate four flights per weekday, American with MD80s, and Delta with CRJ700s operated by GoJet. 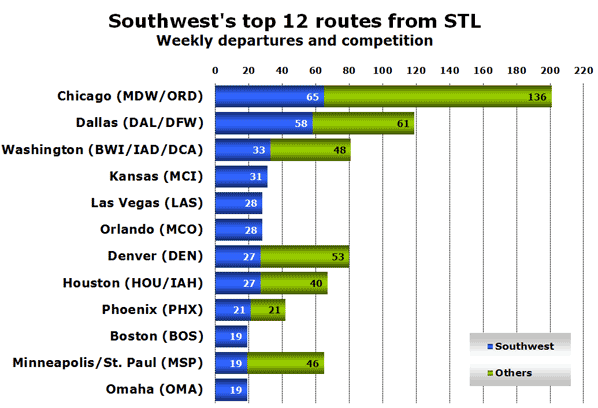 Trivia: The “Lambert” in the airport’s name refers to Albert Bond Lambert who founded the airport in the 1920s. He also won an Olympic silver medal in the team golf competition held in St. Louis in 2004.