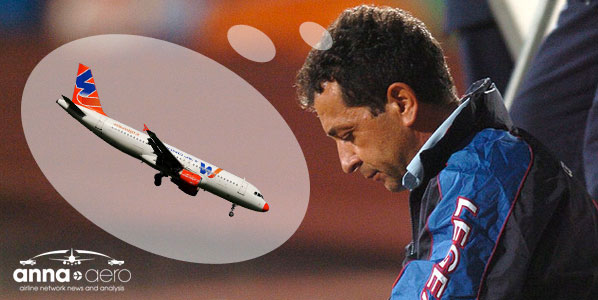 The CEO of failed Wind Jet, Antonino Pulvirenti, is also owner of Sicilian football team Calcio Catania. The collapse of the Alitalia takeover effectively delivers some of the same benefits: five of Wind Jet's top 14 routes change from being a duopoly to Alitalia monopolies.

The collapse of Italian LCC Wind Jet, apparently triggered by Alitalia’s reversal of its previous decision to acquire the airline, is bad news for Italian consumers, but in particular those wanting to travel to and from Catania on the island of Sicily. According to SRS Analyser / Innovata data for July 2012 Wind Jet accounted for just over one-quarter of scheduled seat capacity spread across 10 domestic and two international (Barcelona and Paris CDG) routes. Only the Alitalia group of airlines with around 35% of seat capacity (also serving 10 domestic destinations) has a bigger presence at the airport.

Launched in June 2003 in Sicily, Wind Jet had a fleet of five A319s and seven A320s and carried between two and three million passengers per annum. Apart from its main bases in Sicily (Catania and Palermo), the airline also had a significant presence at Forli (near Bologna), although this was shifted to Rimini at the start of the summer 2011 season.

A closer look at the airline’s busiest routes in July reveals that a total of 14 domestic routes were served at least daily, 10 from Catania and four from Palermo. Alitalia competes on nine of the airline’s daily routes, Meridiana fly on three routes, blu-express and easyJet both on two routes and Ryanair on one. 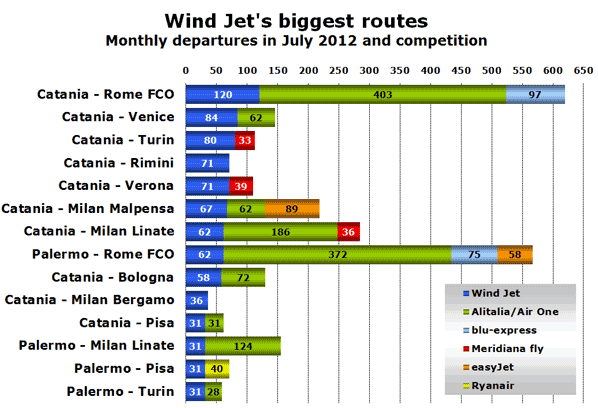 This indicates that a merger between Alitalia and Wind Jet would have resulted in five of Wind Jet’s top 14 routes changing from being a duopoly to being a monopoly. Although Italian authorities had apparently insisted on the carriers giving up a modest number of slots on Catania – Milan Linate, Palermo – Milan Linate and Catania – Rome FCO, this seems unlikely to have been the reason for the deal falling through at the last minute.

Although Wind Jet was primarily a domestic airline, it did operate a number of international routes. During its existence, it linked Sicily with the Czech Republic, France, Germany, Romania, Spain and even (briefly) the UK. However, the nearest thing it had to a country focus was Russia. Moscow Domodedovo and St Petersburg were served once or twice weekly, not just from Catania and Palermo, but also from Forli, Milan Bergamo, Pisa, Rimini, Venice and Verona. In addition, Rostov-on-Don and Samara were both served weekly from mainland Italy during the peak summer season.