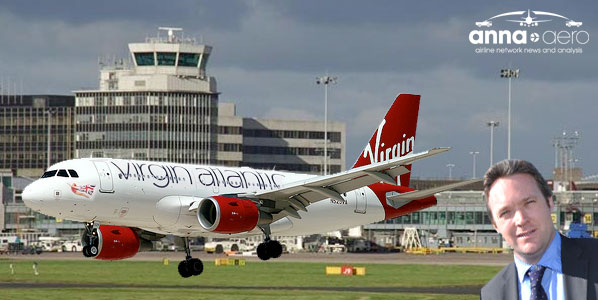 Ken O’Toole, CCO Manchester Airport Group, is happy that Manchester is Virgin Atlantic’s first destination in its short-haul expansion, breaking BA’s new monopoly to London. “We are pleased to see Virgin Atlantic increasing their presence in Manchester and to see competition returning on the London route, as that will be to the benefit of passengers flying from our airport.” However, passenger numbers on the route have declined since 2004.

Whether coincidentally or not, within days of being informed that Sir Richard Branson’s Virgin Group had lost the UK West Coast rail franchise from the end of this year, Virgin Atlantic has announced that it will start operating three daily A319 flights between London Heathrow and Manchester from the beginning of the summer 2013 season. The airline has said that it will utilise its own slots currently leased to another airline, and will not be relying on any so-called ‘remedy slots’ that it has applied for that BA is being forced to give up at Heathrow in return for EU approval of its acquisition of British Midland. Virgin Atlantic has not yet confirmed where it will source the aircraft and crew from.

With IAG (British Airways) having acquired bmi from Lufthansa earlier this year, the city-pair has now basically become a BA monopoly, a far cry from the choice of five airlines that passengers had in both 2005 and 2006 between London and Manchester.

Air passenger numbers between London and Manchester have fallen by almost 50% since the peak of almost two million in 2004. Last year, only Heathrow and Gatwick offered flights to Manchester and the total number of passengers was just under one million, of which just over three-quarters were between Heathrow and Manchester. 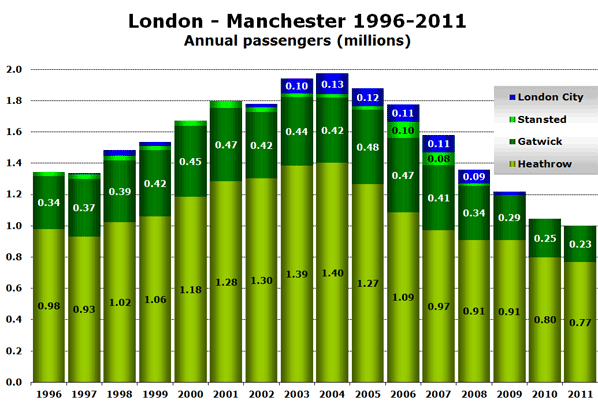 A review of weekly frequencies offered by the various players since the summer of 2004 for the peak summer month of September clearly highlights how the market has declined.

Apart from British Airways and bmi, the market has seen airberlin, CityJet, Eastern Airways and Jet2.com all come and go during the last decade.

Virgin Atlantic’s CEO Steve Ridgway said: “Flying between Heathrow and Manchester is just the start for our new short haul operation. We have the means to connect thousands of passengers to our long haul network as well as to destinations served by other carriers. Our new service will provide strong competition to omnipresent BA. It will keep fares low and give consumers a genuine choice of airline to fly to Heathrow and beyond.”