So far in 2012, Dallas/Fort Worth International Airport has attracted a remarkable number of new routes – and new airlines, such as Emirates, jetBlue and Cayman Airways. This, in combination with locally based Spirit Airlines and American Airlines also growing, means that the airport that ranks as the fourth busiest in the US could be on track for a record year.

Opened to commercial services in 1974, Dallas/Fort Worth International Airport in Texas, frequently referred to by its IATA three-letter code of DFW, ranks as the fourth busiest airport in the US with almost 58 million passengers in 2011, although passenger numbers passed 60 million at the airport as long ago as 1997, and peaked at 60.7 million in 2000. In the first five months of this year, passenger numbers are up 3.6% in total, suggesting that the airport may reach a new high if not in 2012 then maybe in 2013. 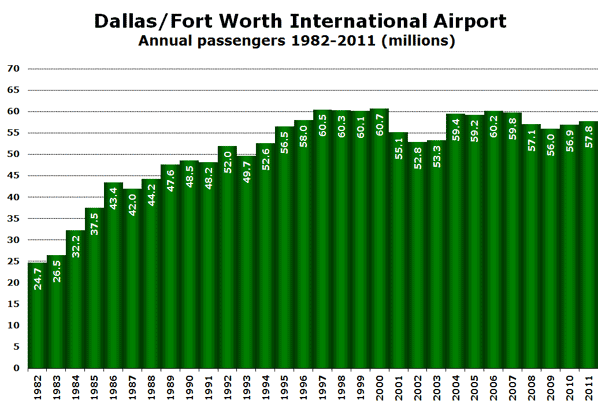 American still has well over 80% of traffic at the airport

With a network of around 180 destinations served non-stop (including 40 international destinations of which 16 are in Mexico), American Airlines and its partner American Eagle Airlines dominates DFW with well over 80% of flights and seat capacity. No other single carrier has more than five percent of either flights or seats.

Spirit Airlines only started serving DFW last May, but already operates to more destinations than any other airline except American. The airline has announced further new routes that will increase its network range to around 25 routes by next summer.

American Airlines has seen passenger numbers grow by 3% so far this year, with all other carriers growing demand by 7.6%. Non-hub carriers have seen traffic growth of 4.4%, while low-cost carriers have reported 9.1% growth in demand.

Finally, foreign flag carriers have seen a 37.5% rise in passengers thanks primarily to the arrival of daily Emirates flights from Dubai back in February, and by the introduction of Qantas’ service from Sydney (in May 2011) which operates via Brisbane on the southern leg of the route. Other foreign carriers at DFW are British Airways (daily flights to London Heathrow), KLM (five weekly flights to Amsterdam), Lufthansa (daily to Frankfurt), Korean Air (daily to Seoul Incheon) and TACA (daily to San Salvador).

In the last two years, DFW has celebrated the launch of some 35 new services, with Spirit Airlines leading the way with 15, followed by American/American Eagle with 13. Virgin America arrived in December 2010 with its two services to California, while Delta, Emirates, JetBlue, Qantas and most recently Cayman Airways have all added a single route.

Domestic fares are among the most expensive in the US