Finland airport traffic up 3% so far this year after 16% growth in 2011; regional airports lead route launches in 2012 As Finnair continues to grow its Europe-Asia hub in Helsinki, the Finnish capital airport’s passenger numbers are on the rise. Chongqing is the national carrier’s latest Asian destination, but Helsinki also gets increased regional feed through the establishment of Flybe Nordic at the end of last year.

Despite covering an area almost the size of Germany, Finland has a population of only just over five million people, making it the most sparsely populated country in the EU. With the majority of the population located in the south of the country, it is no surprise that the country’s main airport at Helsinki dominates Finnish aviation. Between 1998 and 2003, passenger numbers remained virtually unchanged but between 2003 and 2008, demand rose by almost one-third. Passenger numbers fell by almost 8% in 2009 before recovering by 2% in 2010. However, last year saw traffic rise by an impressive 16% to a new record of 19 million passengers across all Finnish airports. 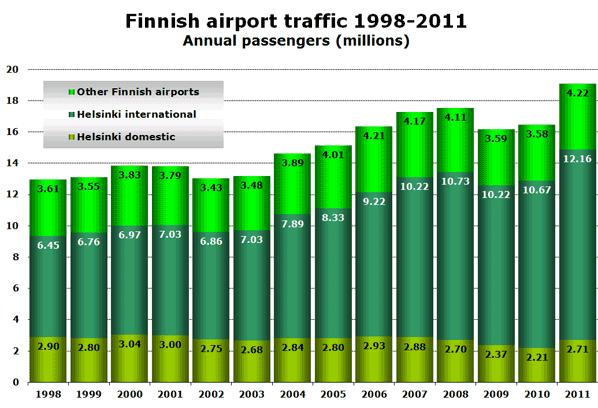 Helsinki’s share of the country’s air traffic has actually increased from 72% in 1998 to 78% in 2011, as Finnair continues to attract connecting traffic, in particular on flights from Europe to Asia. So far in the first seven months, passenger numbers have risen by a further 2.9%, although last month (July) demand fell by 4.3%. One of the reasons for this may be the collapse of Air Finland in June, a carrier that specialised in seasonal leisure routes to the Mediterranean.

International traffic to and from Finland between January and July is up 3.2% overall. However, of the top 15 country markets, passenger numbers are down on nine of them. However, where there has been growth it has been impressive; Denmark up 28.6%, Spain up 27.8%, Sweden up 13.9% and China up 8.9%. 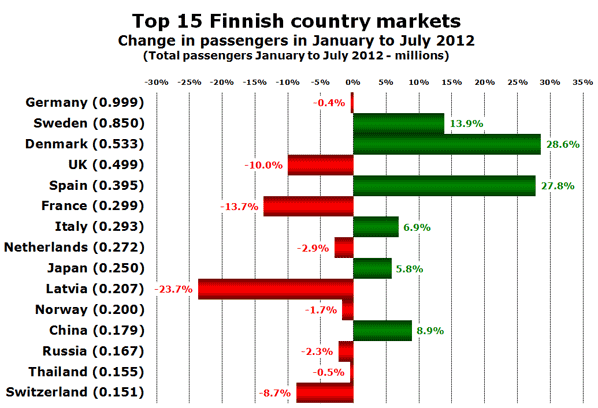 Based on schedule data for August, Finnair remains by far the dominant carrier on international flights with over 55% of the market. Norwegian, which opened a base in Helsinki in March 2011, comes a distant second, operating 18 routes from Helsinki and three from other airports. SAS-owned Blue1 with its fleet of nine 717s comes third, operating mostly to other Nordic countries 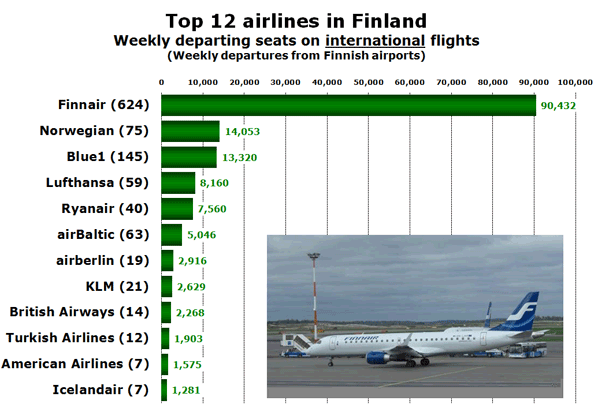 Ryanair’s 17 routes are spread across three airports; Tampere with 11, Turku with four and Lappeenranta with two. Although Wizz Air operates a couple of routes from Turku, other major low-cost airlines, like easyJet, germanwings, Pegasus and Vueling, are notably absent from the Finnish market.

UK regional carrier Flybe now has a Helsinki-based subsidiary, Flybe Nordic, which operates a number of services on behalf of Finnair as well as having a presence in the domestic market. The only domestic route on which there is genuine competition is between Helsinki and Oulu, which is served by Blue1, Finnair and Norwegian.

No other airports with more than one million passengers

While Helsinki handles almost 15 million annual passengers, no other Finnish airport handles more than one million passengers. Oulu and Tampere are the only ones that handle as many as 500,000 passengers. 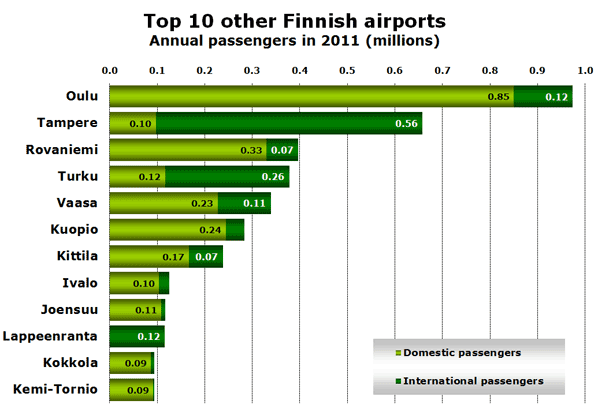 Regional airports benefit most from this year’s new route launches

Since the beginning of the year, anna.aero has identified almost 30 new services that have been started from Finnish airports. Helsinki only accounts for 11 new services while Finland’s regional airports have generated a healthy 16 new services from carriers such as Blue1, Estonian Air, Norwegian and Ryanair. The following table summarises the new services launched so far in 2012, revealing why the Danish and Swedish markets have performed so well this year.