Last December, Delta’s and GOL’s CEOs, Richard Anderson and Constantino de Oliveira, celebrated the US airline’s investment in the Brazilian carrier, giving an impulse for change. As it happened, one of the first changes was that of the CEO, with the former racing driver de Oliveira being replaced by Paulo Kakinoff, previously President of Audi Brasil.

Brazil’s two leading domestic carriers, TAM and GOL, may have seen their combined market share diminish from 95% to 75% in just over four years, but out of the two, GOL appears to be the one with the greater loss. Since it last transported more passengers than TAM in September 2011, GOL, together with its subsidiary Webjet, has seen traffic figures contract. There is now a gap of 8 percentage points between GOL and Brazil’s largest airline. As of last month, GOL is headed by the former president of Audi Brasil, Paulo Kakinoff, who is set to further adjust the airline’s offering as Brazil’s regional airlines grow in power and the LATAM operation develops.

Capacity reductions mitigate traffic loss in the first half of 2012 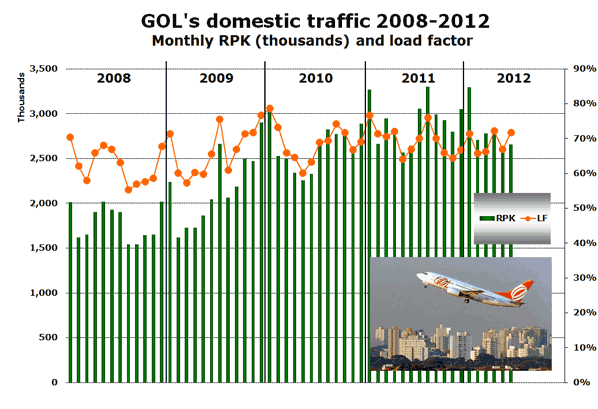 Having grown its domestic traffic at a rate of 21% in both 2009 and 2010, GOL then saw further increases in 2011, albeit at half the pace. As the domestic market in Brazil slowed down in the first half of 2012, the airline’s traffic growth rate plummeted below the 2% mark compared with the year before. Accordingly, capacity expansion, which in the last three years equalled 14%, 18% and 9% respectively, had to be slowed down in order to rescue deteriorating load factors. In the first six months of 2012, the combined capacity offered by GOL and Webjet was up by only 2%, a significant shift if compared with the almost 8% growth in the same period only a year before.

Examination of GOL’s capacity data for August shows, that the airline has cut the number of weekly seats offered by 7% compared with last year. Out of a total of 51 airports the airline uses across the country, 30 suffered from GOL’s downsizing, six remained unaffected and the remaining 15 noted small increases. Marginally smaller cuts to the tune of 6% were undertaken in Webjet’s network. Notably, TAM reduced its domestic capacity by more than 11% over the same period, while the smaller competitors Azul, Avianca Brazil and TRIP all continued to grow at a pace of above 20%. 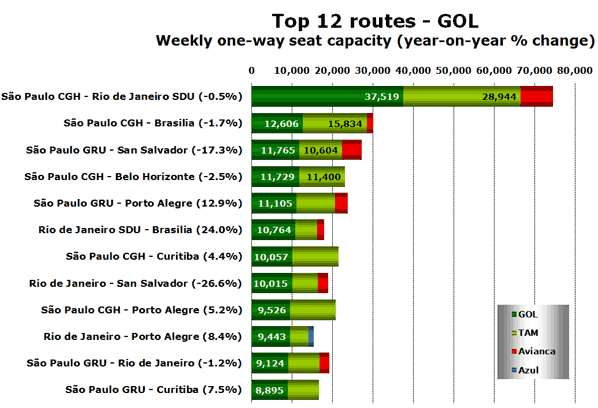 All of GOL’s 12 largest domestic routes involve at least one of the four airports serving São Paulo and Rio de Janeiro, and the busiest route unsurprisingly connects the two cities. Despite the small capacity reduction (-0.5%), GOL provides more weekly seats on the route between the two downtown airports São Paulo Congonhas and Rio de Janeiro Santos Dumont than TAM and Avianca Brazil combined.

Half of the airline’s 12 busiest routes saw capacity decreases over last year, with the link from Rio de Janeiro to San Salvador in Bahía taking the biggest hit (-26.6%). Competition on all these routes comes from TAM, but Avianca Brazil provides capacity on seven of them. Azul is present only in the market from Rio de Janeiro to Porto Alegre, as it concentrates more on smaller markets.

Quite a different situation reveals itself with regard to GOL’s international network. The airline has marginally increased its presence with both weekly seats and frequencies up by just over a percent. As the airline attempts to restructure this part of the business, it reduced capacity on flights from the southern-Brazilian city of Porto Alegre, which to-date served as GOL’s main hub between the interior and destinations in Uruguay and Argentina. Instead, this week the airline launched direct services from São Paulo Guarulhos to both Montevideo in Uruguay and Asunción in Paraguay, which will operate on a daily basis. Following the recent demise of Uruguay’s Pluna, which served the Montevideo to São Paulo Guarulhos market with 27 weekly flights, TAM is the only competitor in the market.

In addition, the airline is adding a daily stopping service from São Paulo Campinas to Buenos Aires Ezeiza, which will operate via Curitiba. No capacity changes were noted for the remaining eight international routes offered by GOL.