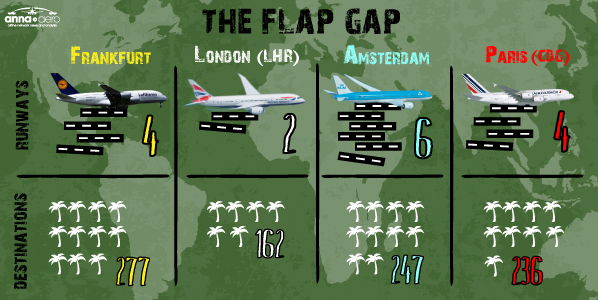 It really is true! For the benefit of our great leaders, scientists at anna.aero have proved there is a direct correlation between having enough runways, and the ability to fly to more places.

As the world’s Olympians head back home after their participation in London 2012, anna.aero has decided to once again compare the global networks of Frankfurt, London, Amsterdam, and Paris CDG (often referred to by the inelegant acronym of the “F.L.A.P.” airports). As part of this analysis, we have produced a free, downloadable spreadsheet which enables users to sort and analyse the current network data in a variety of ways.

While London Heathrow remains the biggest of the four airports in terms of annual passenger numbers and weekly departures, it currently has direct services to 162 destinations, considerably fewer than its rivals in Amsterdam (247), Paris CDG (236) and Frankfurt (277).

Heathrow: less flights to other UK airports than its rivals 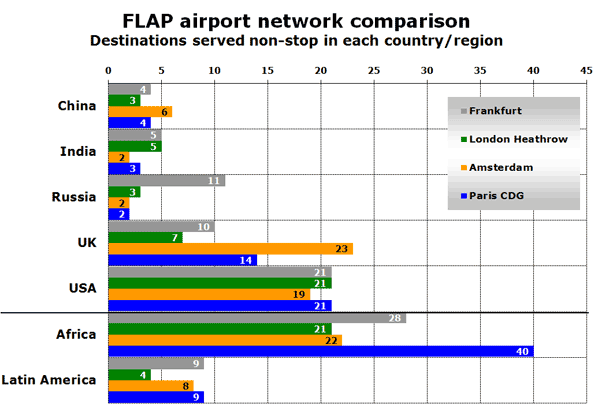 Analysis of each airport’s available routes by country and region reveals a number of interesting and curious statistics.

Even the UK Coalition government is beginning to recognise that Heathrow’s expansion, while not a vote-winner, is structurally vital to Britain’s future competitiveness so, after a six-month delay, this autumn it will begin a consultation on South East England’s airport capacity which it hopes will re-recommend building a third Heathrow runway (or perhaps a new airport in the Thames Estuary, the project favoured by London’s Mayor). This will most likely leave the actual decision until after the next election in 2014/15, meaning it will take until around 2016-20 before any new runway becomes operational, or about 10 years later than the opening of Frankfurt’s fourth runway in 2011. But this will never be too late for the airlines who will still queue up to use it, no matter how long it takes – something recognised by the Qatar Investment Authority which obviously thinks it will get a safe return on the $1.4 billion it is paying for a 20% stake in Heathrow’s operator, BAA.

Be your own analyst: Use anna.aero's free, downloadable spreadsheet allowing you to sort and analyse the current network data of the FLAP airports in any way you choose!