Although Israel’s flag carrier El Al is growing, having launched flights to Vilnius and Lisbon earlier this summer, foreign airlines are increasingly finding their way to Tel Aviv; a development that appears not to please El Al, which questions the timing of the proposed open skies agreement with the EU.

There is currently uncertainty surrounding the open skies agreement between Israel and the European Union as Israel’s airlines are putting pressure on the country’s politicians, not the least as El Al continues to report losses. The plan is for a liberal agreement to be gradually introduced from April next year, provided it is approved by Israel’s parliament, the Knesset; however, in light of the ongoing political debate, this date may be delayed.

Tel Aviv’s Ben Gurion International Airport, which had a throughput of almost 13 million passengers last year, is dominant among Israel’s airports. Only three further airports in the country have scheduled commercial services; Eilat (1,400,067 passengers in 2011) and Ovda (136,791) by the Red Sea in the south of the country, and the small domestic airport Tel Aviv Sde Dov (655,772 passengers in 2010). 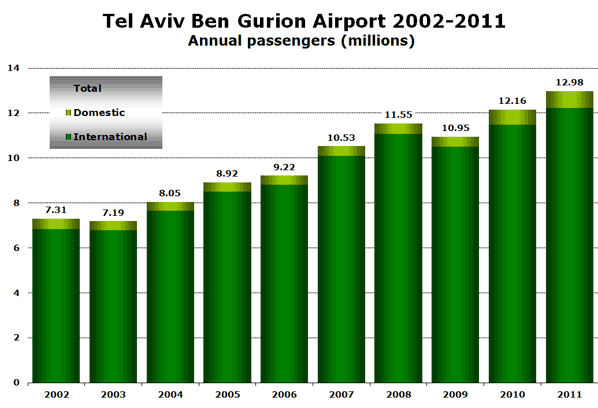 However, Israel’s flag carrier El Al is not the airline to lead the growth. In the same time period, the airline has grown its seat capacity out of Tel Aviv by 42%. However remarkable that growth may seem, this still means that the airline’s share of total seat capacity at Tel Aviv has slipped from 46% in 2002 to 35% in 2011.

7 LCCs even before open skies

In spite of an open skies agreement not yet being in place, some European low-cost airlines have made use of sufficiently liberal air services agreements and already entered the Israeli market. easyJet and easyJet Switzerland currently serve Tel Aviv from London Luton, Basel and Geneva and a second route from the UK, from Manchester, is set to launch in November. Further low-cost airlines serving Tel Aviv are Norwegian (from Stockholm Arlanda), Vueling (from Barcelona), Pegasus (from Istanbul Sabiha Gökçen), SmartWings (from Prague and Bratislava), germanwings (from Cologne/Bonn) and TUIfly (from Munich).

Several new airlines have begun serving Tel Aviv in 2012. niki launched flights from Vienna in February, Olympic Air from Athens in March and SAS from Copenhagen in June. However, both Olympic and SAS had served Tel Aviv in the past.

Further new routes to Tel Aviv this year have complemented airlines’ existing services to the airport. Such new services include Air France’s routes from Nice and Marseille (the latter launching next week, on 3 September), with Transaero from Moscow Vnukovo, Lufthansa from Berlin Tegel and Aegean Airlines from Thessaloniki. El Al has also grown, launching flights to both Vilnius in Lithuania and Portugal’s capital Lisbon. 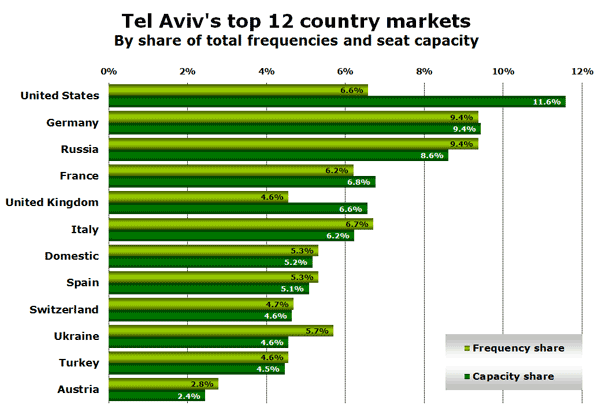 Because of Israel’s unique political and historical situation, the biggest country market out of Tel Aviv is something as unusual as a long-haul market. However, O&D traffic between the US and Israel can be presumed to be even bigger than the non-stop capacity share suggests, as a number of European carriers catch considerable transfer traffic between the two countries.

The top 12 country markets out of Tel Aviv together make up just over 75% of the total seat capacity at the airport. All remaining markets but one are to European countries, with the domestic Israeli market (ranked seventh) being the only exception.

Discrepancies between frequency and capacity shares reveal that, along with the United States, traffic to and from the United Kingdom is operated with larger aircraft than to other markets. Conversely, Ukrainian flights are operated with lower capacity.