At the end of last year, Lao Airlines took delivery of two brand-new A320s, resulting in a 50% boost to the airline’s current seat capacity and a new route to Singapore.

Lao Airlines, the national carrier of the Southeast Asian country of Laos, is maybe unexpectedly one of Asia’s fastest-growing airlines in terms of seat capacity offered, as capacity has grown by 50% in the last year.

The reason is the arrival last November and December of two A320 aircraft to the airline’s fleet, which greatly have increased capacity on the airline’s services. The two brand-new 142-seat aircraft complement the airline’s remaining fleet of eight relatively new turboprops – four ATR 72s and four MA60s – that are spread across the airline’s two bases in Laos’ capital Vientiane in the south of the country and the UNESCO World Heritage Site Luang Prabang in the north. 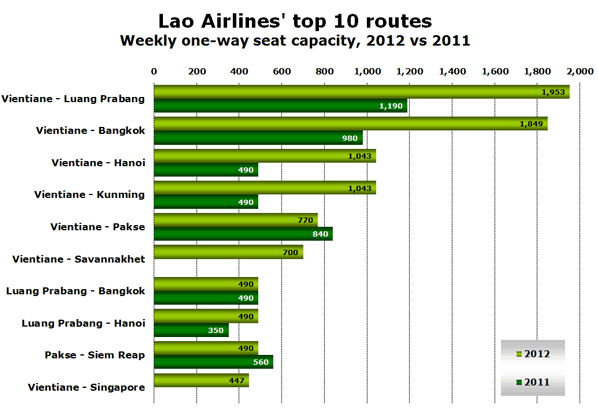 On several of Lao Airlines’ biggest routes, capacity has nearly, or even more than, doubled in the last year. However, there are two notable exceptions to the growing trend in the top 10. On two routes, Lao Airlines has in fact reduced capacity; the domestic route between Vientiane and Pakse as well as from Pakse to Siem Reap in Cambodia.

Two new routes have also been launched in the last year; the route between Laos’ capital Vientiane and Singapore was launched as soon as the airline took delivery of the first A320 last November, while the domestic service between Vientiane and Savannakhet already is the airline’s sixth-largest, having launched at the end of October last year, but not operating between February and May this year.

The longer range of the new A320s have opened up destinations such as Singapore to Lao Airlines, which otherwise focuses on the domestic market (43% of capacity) and international flights to neighbouring countries; Thailand (25%), Vietnam (15%), China (10%) and Cambodia (4%).