Bologna’s latest new airline is Aeroflot, which now serves the northern Italian airport daily from its Moscow Sheremetyevo hub, but the biggest contributor to Bologna’s passenger growth in the last few years is Ryanair, which dominates the airport with a third of total seat capacity.

The airport serving the northern Italian city of Bologna, which is named after the radio pioneer and Bologna son Guglielmo Marconi, ranks as Italy’s seventh-busiest airport after Rome Fiumicino, Milan Malpensa, Milan Linate, Venice, Milan Bergamo and Catania, but just ahead of Naples. 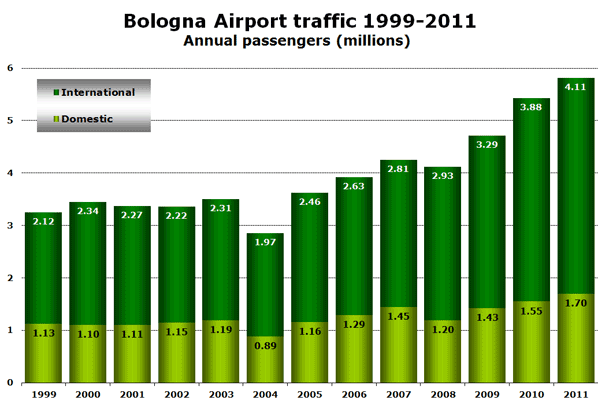 The biggest contributor to this growth is Ryanair, which gradually started moving routes from nearby Forlì to Bologna in October 2008 and then established a base at the airport in March 2009. This year, Ryanair serves 34 destinations from Bologna.

So far in 2012, Bologna’s passenger numbers are down by a percent as the airport reports a minor increase in domestic traffic and a slight fall in international numbers. 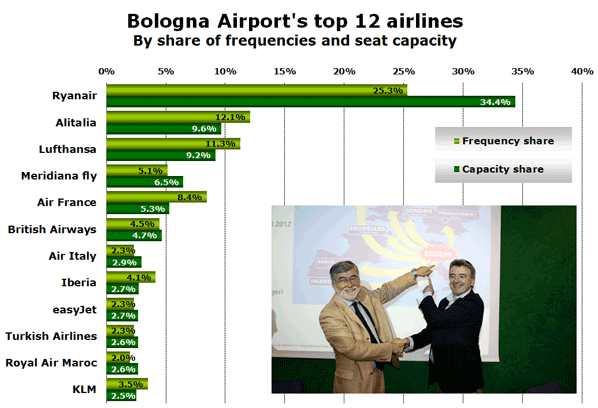 Ryanair is now Bologna’s dominant airline with more than a third of the airport’s total seat capacity and more than a quarter of frequencies. No other airline at the airport has a double-digit capacity share, as Alitalia and Lufthansa just fall short. With Ryanair so dominant, other low-cost airlines appear to be scared off and easyJet is notably the only other LCC making the top 12 list. 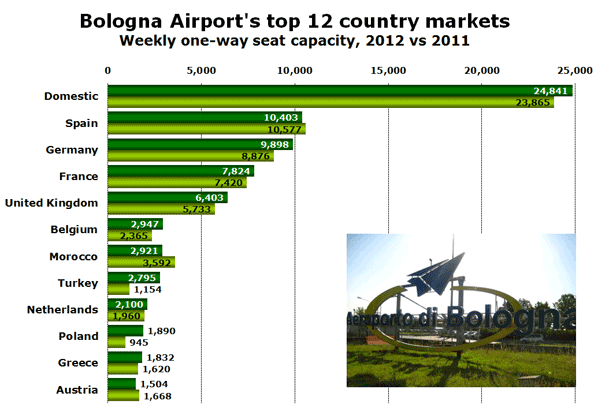 The top 12 country markets served from Bologna make up 90% of the airport’s total seat capacity. The biggest international market, Spain, has seen a minor 2% fall in capacity in the last year, but the bigger losses have been in the Moroccan (-19%) and Austrian (-10%) markets. However, several other markets are growing strongly; the Turkish market is up by 142% and the Polish market has doubled, overshadowing the still strong growth of the Belgian market (+25%), Greece (+13%), Germany and the UK (each +12%).

In the last year, 12 new routes have been launched to and from Bologna, as summarised in the table below. Of these, four are notable for being new airlines at the airport; Blue1 from Helsinki, Air Moldova from Chisinau, Pegasus Airlines from Istanbul Sabiha Gökçen and Aeroflot, which launched daily flights from its Moscow Sheremetyevo hub this week.