ECAir connects the Congo with Europe; plans for regional expansion With the launch of its new service from Brazzaville to Paris CDG on 24 August, ECAir became the first Congolese airline to fly to Europe since the ban was imposed by the European Union in 2006.

Equatorial Congo Airlines, branded as ECAir, launched on 23 September 2011 with a thrice-daily service connecting the capital of the Republic of the Congo, Brazzaville, with Ponte-Noire, the country’s second-largest city, located on the coast. The 380-kilometre route is operated with 737-300 aircraft leased from Geneva-based PrivatAir, and remains the airline’s only domestic service.

Although Congolese-owned, ECAir’s fleet is registered and maintained in Switzerland, which is key to the airline’s abilty to operate to Europe in the face of a ban on all Congolese carriers in the European Union. ECAir now uses this to its advantage, since the airline now has commenced operations to Paris Charles de Gaulle Airport in France. As of 24 August, ECAir flies to the French capital with thrice-weekly frequencies using a 757-200, also leased from the same Swiss company, configured with 16 seats in business class and 132 in economy. 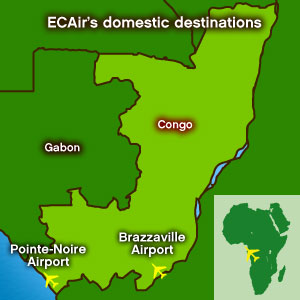 As the brainchild of Lufthansa Consulting, which led the start-up process, ECAir is in many ways similar to Korongo Airlines, which started its operations in the Democratic Republic of Congo in mid-April and is part-owned by Brussels Airlines. In the medium term, ECAir plans further regional services, with Douala in Cameroon and Cotonou in Benin both being in the pipeline.