Malaysia Airlines has joined AirAsia X as the second Malaysian airline to offer services from Kuala Lumpur to Kathmandu in Nepal. While Kathmandu remains the capital of independent travel, it is also an increasingly attractive holiday destination catering for all budgets. Further demand comes from an estimated 300,000-strong population of Nepali workers in Malaysia.

Nepal’s only airport to handle international flights, Tribhuvan International Airport, serves Kathmandu and has seen plenty of change since anna.aero last analysed it as part of a Nepal country analysis in July 2009. As much as 67% of all traffic at the airport is now made up of international passengers served by a wide array of 29 airlines, of which four only launched their operations in the course of last year. 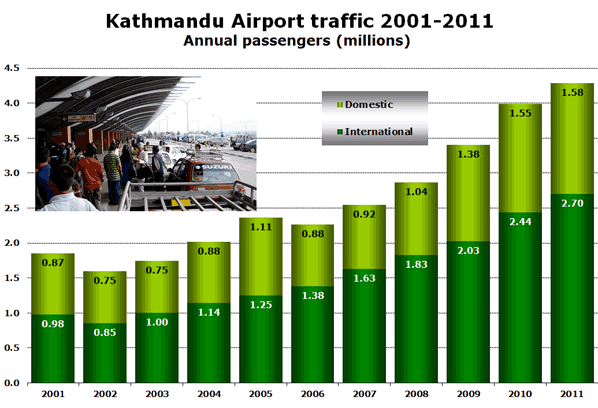 Overall traffic at Kathmandu Airport has more than doubled in the last decade, and in 2011 some 4.28 million passengers used the airport. Notably, the international market has proved more stable, achieving double-digit growth every year since the weak 2002, except in 2005 when the growth fell just short of the double-digit mark. Domestic demand has in turn been much less predictable, growing by 27% in 2005 only to contract by 21% a year later. The strong growth of 33% in 2009 might not be repeated soon again as domestic demand seems to have lost its dynamic in 2011, when it grew by only 2%.

Nepal Airlines is the country’s only local airline to have a visible international presence, but it only just makes it among the top 10 international airlines with 5% of frequencies and 6% of current seat capacity in Kathmandu. Notably, Qatar Airways leads the table with 11% share of seat capacity, which the airline provides operating its sole route to Doha with 28 weekly frequencies. The most dynamic airline last year was Dragonair, having grown its seat capacity by 74% in the last year, while Nepal Airlines has cut 52% of both frequencies and seats. 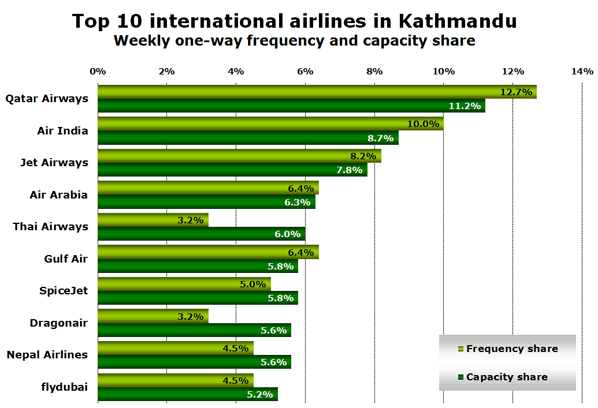 A total of eight airlines have launched new routes at the airport since last September, although only Air China’s twice-weekly service from Chengdu and RAK Airways’ thrice-weekly flights to Ras Al-Khaimah in the UAE were previously unserved routes. On the existing routes, two airlines (India’s IndiGo and Bhutan’s Drukair) decided to try their strengths in Kathmandu’s busiest market, Delhi, as they launched daily and twice-weekly flights respectively. Jet Airways, Air India and SpiceJet already provide a combined 39 weekly frequencies on the route, while Nepal Airlines decided to drop its daily service last April. Similarly, two Malaysian carriers entered the Kathmandu to Kuala Lumpur market, previously Nepal Airlines’ stronghold, with three weekly flights each. With 117% more weekly seat capacity in September 2012 than in the corresponding month a year before, the route from Kathmandu to Kuala Lumpur was the fastest growing service last year, and has become Kathmandu’s sixth-largest international route.

Kathmandu International Airport’s domestic network is made up by three airlines, although it is dominated by Buddha Air. The carrier, which operates a mix of turboprop aircraft, provides 68% of all weekly domestic seats in Nepal and 50% more frequencies than Yeti Airlines, Nepal’s second largest domestic airline. Notably, Nepal Airlines’ role serving domestic traffic is very limited, as the carrier only offers only 20 weekly frequencies, or 4% of total capacity (although it does serve a total of eight destinations, only two less than Buddha Air).