Thai Airways growing again as A380 arrives; China biggest, but next new route to Sapporo in Japan Thai Airways is already preparing for next month’s introduction into service of the A380. The airline has experienced stagnant passenger numbers for several years, but appears eager to change the trend with its considerable orders for the latest generation of aircraft.

Thai Airways, formally Thai Airways International, is taking delivery of its first A380 later this month, planning to take the aircraft into service in early October, initially on intra-Asian routes to Singapore and Hong Kong, and from December to Frankfurt, while Tokyo Narita and Paris CDG have been announced for early next year.

The A380s on order are just a part of the founding Star Alliance member’s considerable fleet expansion and rejuvenation programme. Only in terms of widebodies, the airline has orders for three new generation aircraft – A380, 787 and A350 – as well as previous generation A330-300 and 777-300ER aircraft. 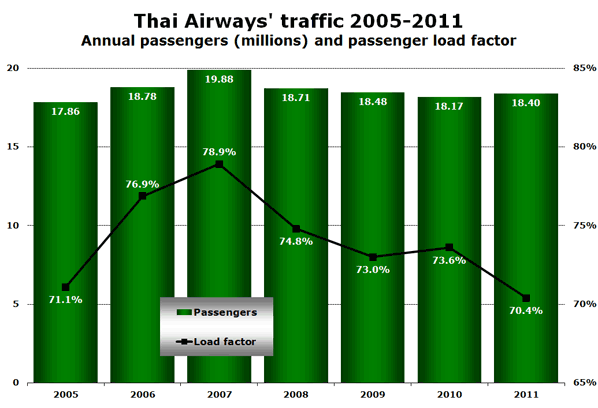 Thai has experienced a very stagnant market in the last few years, with little change in total passenger turnover from one year to the other. Last year’s passenger numbers were 7% lower than in the peak year 2007 – and the passenger load factor was record low at 70.4%. However, the airline is on track for considerable improvement this year. In the first seven months of 2012, Thai Airways’ passenger numbers are up by 9% on the same period last year and the passenger load factor has increased by five percentage points to 77.1%.

Thai Airways dominates Bangkok’s Suvarnabhumi Airport with 38% of the airport’s seat capacity; however, the national airline’s dominance will be greater from next month, when the second-largest airline, Thai AirAsia, moves to Bangkok’s old airport Don Mueang. Thai Airways’ share of total scheduled seat capacity at the main airport will then reach 44%.

Domestic traffic makes up 26% of Thai Airways’ total seat capacity and although that makes the national carrier the leading domestic airline in Thailand, its market share is diminishing as the airline’s competitors are expanding faster. With a 32% share of domestic capacity, Thai Airways primarily competes against the two low-cost airlines Thai AirAsia (24%) and Nok Air (21%), the latter of which Thai Airways is a minority shareholder, as well as the regional carrier Bangkok Airways (19%). 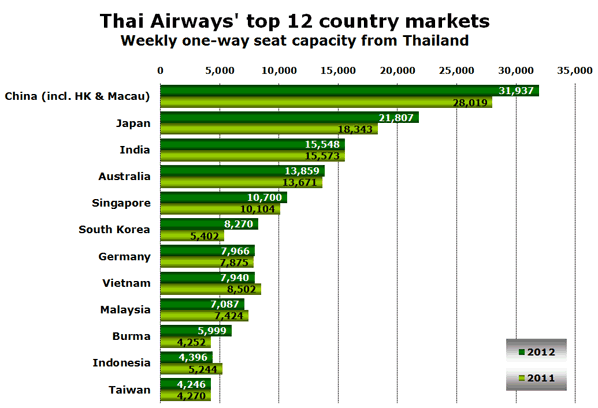 Thai Airways’ top 12 routes make up 76% of the airline’s total seat capacity. China is the dominant market, with Thai Airways serving six destinations in Mainland China in addition to its flights to Hong Kong and Macau. The airline’s twice-daily flights between Bangkok and Macau, which are operated by its new premium regional subsidiary Thai Smile, were only launched in July and contribute to Thai’s 14% growth to China in the last year.

In spite of Vietnam and Indonesia generally being forecasted to be among the world’s fastest-growing aviation markets, Thai Airways has reduced its capacity to both country markets in the last year. However, capacity to the emerging Burma market is up by 41%.

Australia – where Thai serves Melbourne, Sydney, Brisbane and Perth – and Germany, served through Frankfurt and Munich, are the only intercontinental country markets to make it into the top 12, but Thai serves further 11 airports in Europe (Paris CDG, London Heathrow, Stockholm Arlanda, Copenhagen, Zurich, Oslo, Rome Fiumicino, Moscow Domodedovo, Madrid, Brussels and Milan Malpensa), as well as Auckland in New Zealand and Johannesburg in South Africa. Thai is also present in the US market; however, the airline’s Los Angeles service is now operated as a one-stop service via Seoul Incheon as the airline phased out the long-range A340-500 aircraft from its fleet earlier this year.

Drops Athens in favour of Brussels; Sapporo in Japan next new destination 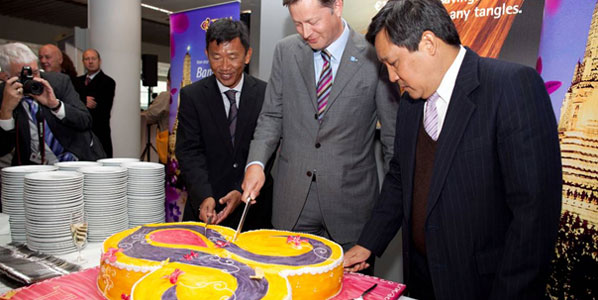 Thai Airways’ route to Brussels was only launched in November last year, but the airline has already announced capacity increases on the route, through both larger aircraft and an additional weekly frequency.

In the last year, Thai Airways has also departed from a country market as the route to Athens in Greece was dropped in November last year. A further cancellation that has been announced is the domestic route between Bangkok and the island of Koh Samui, which again becomes a Bangkok Airways monopoly in mid-January next year.

As the Athens service was dropped, another European airport benefited, since Thai instead decided to launch a route to Brussels. The route has clearly performed well, since Thai already this winter season will increase the both aircraft size and frequencies on the route. Except for the Brussels route and the aforementioned route to Macau, Thai has only launched one new route in the last year, even when including the routes launched by Thai Smile, which operates under the same TG code. The new service, between Phuket and Seoul Incheon, contributes to Thai’s 53% growth in the South Korean market; however, this market is also boosted by the added stop on the Los Angeles route.

At the start of the winter scheduling season, Thai will add its sixth destination in Japan; Sapporo Chitose, which initially will be served three times weekly from Bangkok with A330-300s, increasing to four weekly flights at the end of December. Thai Smile has also announced a future new route launching next summer season, between Phuket and Singapore. The daily A320 operation will complement Thai’s multiple daily widebody operations to Singapore from Bangkok.