Mexicana has no successor on 11 international routes! A notable route left vacant was that between the capitals of Mexico and Venezuela; AeroMexico only launched daily flights from its Mexico City hub to Caracas in October 2011.

When Mexico’s flag carrier Mexicana de Aviación ceased operations two years ago, it accounted for 27% of the country’s domestic and 17% of Mexican international traffic. Other airlines have been quick to fill the void in the domestic market. The rise of Interjet (+73% domestic seat capacity, August 2012 v August 2010), Volaris (+58%) and VivaAerobus (+42%) have been reported on by anna.aero in the past, along with AeroMexico becoming the country’s biggest domestic carrier.

The Mexican market continues to grow overall, with passenger numbers increasing by 11.2% domestically and 7.3% internationally in the first six months of 2012, and is this year on track to beat the 2008 record of 85 million passengers. But what happened to the international legacy of Mexicana? 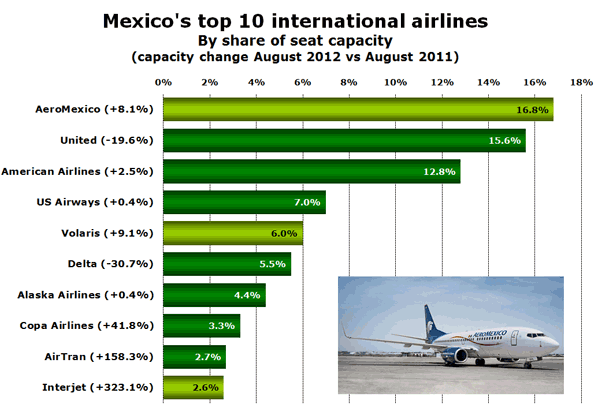 Although AeroMexico now also ranks as Mexico’s biggest international airline, the US carrier United is a close runner-up, in spite of having cut its Mexican network drastically in the last year (although fellow US carrier Delta’s cuts have been even more dramatic). The fastest international growth since last August has come from the local low-cost carrier Interjet as well as Southwest-owned AirTran of the United States.

No successor on 11 routes

In July 2010, a month before Mexicana suspended operations, the airline operated a total of 59 international routes, competing against a range of domestic and foreign carriers. Of those, 17 disappeared from the airline’s schedule in August, just before the company went out of business, including all international services from Guanajuato, as well as significant cuts in Guadalajara (-60%), Monterrey (-42%) and San José del Cabo (-40%). Notably, out of 11 routes never to be taken up by other airline after Mexicana’s demise, seven were among the ones dropped by the carrier prior to suspension of operations.

AeroMexico sluggish to take over

In August 2010, AeroMexico was already stronger than Mexicana in the domestic market, but the two carriers also competed on as many as 17 international routes. Analysis of schedule data shows that AeroMexico reacted slowly to Mexicana’s demise in many markets, either by taking up vacant routes with significant delay, or by taking time in replacing Mexicana in markets were incumbent competition was present.

AeroMexico did not decide to take up any of the Mexicana’s former international routes until January 2011, when the airline inaugurated services from Mexico City to both Havana (served exclusively by Cubana for four months) and Montreal (taken up by Air Canada in November 2010). In fact, AeroMexico’s most recently launched routes, from Cancún to New York JFK and to San José in Costa Rica that the airline began operating as recently as in July 2012, were previously served by Mexicana. The Costa Rican destination was left unserved since August 2010, while New York JFK was offered by JetBlue (14 weekly flights) and American Airlines (7). A notable route that was left vacant for well over a year is that between the capitals of Mexico and Venezuela, as AeroMexico only launched daily flights to Caracas from its Mexico City hub in October 2011.

In addition, AeroMexico launched further six international ex-Mexicana routes, but consequently decided to discontinue operations. Today, one of these routes remains vacant, four are operated by US carriers only, and on one route, high-frequency competition from the Mexican low-cost airline Volaris was too strong for AeroMexico’s low-frequency operation.

Services on a total of 23 international routes previously operated by Mexicana were launched by carriers other than AeroMexico. 16 of these routes were already operated by AeroMexico, resulting in increased competition for the SkyTeam airline.

The Mexican low-cost airlines Interjet and Volaris took up four and five of the international routes respectively, but it is foreign carriers that have been very active. Copa Colombia moved fast, connecting Bogotá and Mexico City already in October 2010, as well as adding services to Cancun in January 2011. But US airlines continue to reign in a number markets, including Los Angeles to Cancun and Puerto Vallarta, where Virgin America has added services to the already existing flights from United, Delta and Alaska Airlines.