Baltimore/Washington welcomes Spirit Airlines and Condor in 2012; Southwest/AirTran share 71% of traffic in 2011 Baltimore/Washington International Airport’s latest new airline is Spirit Airlines, which began operating two routes to the Maryland airport last week. However, the airport is dominated by another low-cost airline, as Southwest and AirTran combined account for over 72% of the airport’s passengers, resulting in lower than average fares at the airport.

Last week saw the arrival of a new airline to Baltimore/Washington International Airport (BWI for short) when Spirit Airlines began daily flights to both Dallas/Fort Worth in Texas, and Fort Lauderdale in Florida. Last year, the airport handled over 22 million passengers making it the 23rd busiest airport in the US as passenger numbers increased by a modest 2.1%. The airport recently reported its busiest ever operating month when over 2.22 million passengers were processed in July. Traffic in the first seven months of 2012 suggests that the airport is likely to break its annual passenger record figure for the third year in succession. 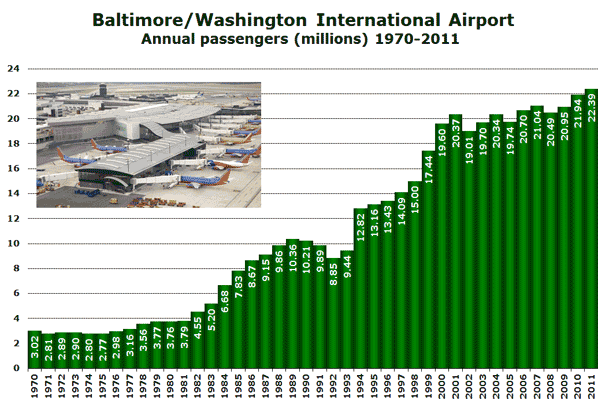 Southwest’s acquisition of AirTran means that the airline in effect accounts for over 72% of the airport’s passengers according to statistics for July. The next biggest carriers in terms of passenger market share are Delta (9.5%), United/Continental (6.6%), US Airways (5.3%) and American (3.5%). 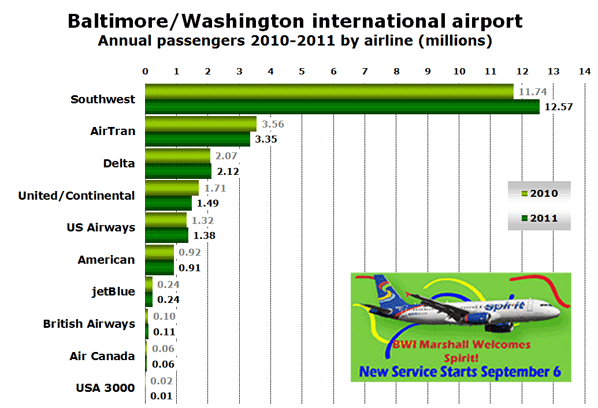 According to US RITA BTS data for the 12 month period ending May 2012, the top five domestic routes in terms of passenger numbers are Atlanta, Boston, Charlotte, Orlando and Detroit. Of these, Atlanta was the fastest-growing thanks to Southwest introducing its own flights on the route in February, complementing the existing service operated by its subsidiary AirTran, and Delta.

During the last 12 months, the airport has succeeded in attracting two new carriers to launch international services. On 2 July, German leisure airline Condor began twice-weekly non-stop flights to Frankfurt and carried 4,651 passengers in the first month of operation. In May, Bahamasair had also initiated a new twice-weekly service from Freeport using a 737-400. This helped the airport to report a 17% growth in international passengers in July. The airport’s international route network also includes Aruba (operated by AirTran), the Bahamas (AirTran to Nassau), Bermuda (AirTran), Canada (Air Canada to Toronto), Jamaica (AirTran to Montego Bay), Mexico (AirTran to Cancun), Puerto Rico (AirTran to San Juan) and the UK (British Airways to London Heathrow).

Domestic air fares are 5% below the national average

According to US DOT Office of Aviation Analysis figures for the fourth quarter of 2011 (the most recent available), average one-way fares at Baltimore/Washington are 5.3% cheaper than the national average of $182. In the fourth quarter of 2009 average fares were 8.5% cheaper than the national average at $149, highlighting how the US airline industry (and in BWI’s case Southwest in particular) has been able to survive rising fuel prices by successfully raising fares without seeing a significant fall in demand.