Boeing widens the gap over Airbus; Ethiopian Airlines and LAN welcome the 787 Ethiopian Airlines’ Addisu Legesse, chairman, and Tewolde GebreMariam, CEO, cut the ceremonial ribbon during the delivery ceremony for the airline’s first 787 along with the US Ambassador to Ethiopia, Donald Booth, and Boeing’s VP Sales Latin America, Africa & the Caribbean, Van Rex Gallard.

Boeing remains in the lead of the 2012 delivery race against Airbus and even managed to considerably increase the gap, as it delivered more aircraft than the European air framer for the first time in three months. While Airbus bettered its results for narrowbodies by two units compared to August 2011 and maintained the number of widebodiy deliveries at constant number, Boeing decreased its single-aisle deliveries to 32 from 40 last August – but doubled the number of widebodies delievered. 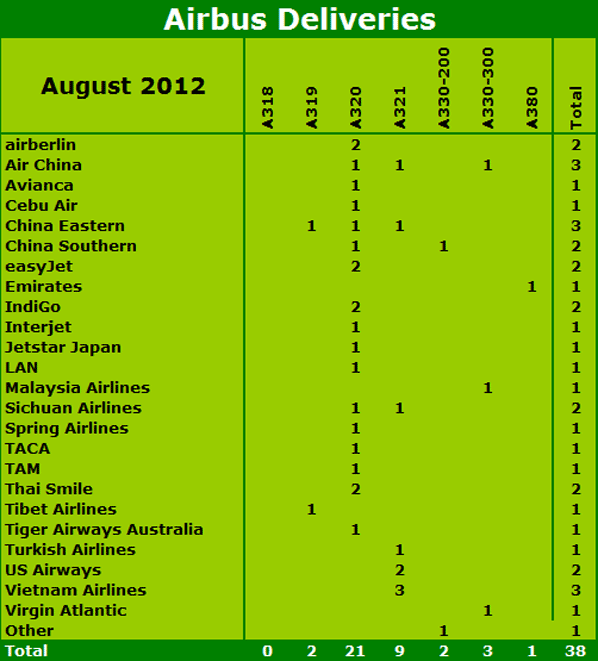 Airbus closed the month with a total of 38 delivered units, which is nine aircraft less than in July 2012, but two units more than in August last year.

Once again, August deliveries were led by the A320 family, with a total of 32 single-aisle jets provided to airlines worldwide. China Eastern and Vietnam Airlines were the largest recipients last month; the Chinese carrier took one A319, A320 and A321 each, while the Vietnamese airline saw its fleet reinforced with the addition of three A321s. Six other airlines received more than one A320 family aircraft, including the recently launched Thai Smile, subsidiary of Thai Airways. This year to date, Airbus delivered 285 single-aisle airframes, 12 more than its American rival.

Six widebody aircraft were delivered in August, the lowest output since March. Notably, Emirates took the delivery of the sole A380 this month. Additionally, China Southern Airlines received an A330-200, while one A330-300 each went to Air China, Malaysia Airlines and Virgin Atlantic. MNG Airlines, Turkey’s dedicated freight operator, saw the addition of its first A330-200F cargo aircraft. Ignacio Ceuto, LAN’s CEO, cut the celebratory ribbon with the help from Boeing and Rolls Royce officials. The carrier, which is the first in the Americas to operate the 787, has ordered 30 units of the type of which three are due for delivery this year. 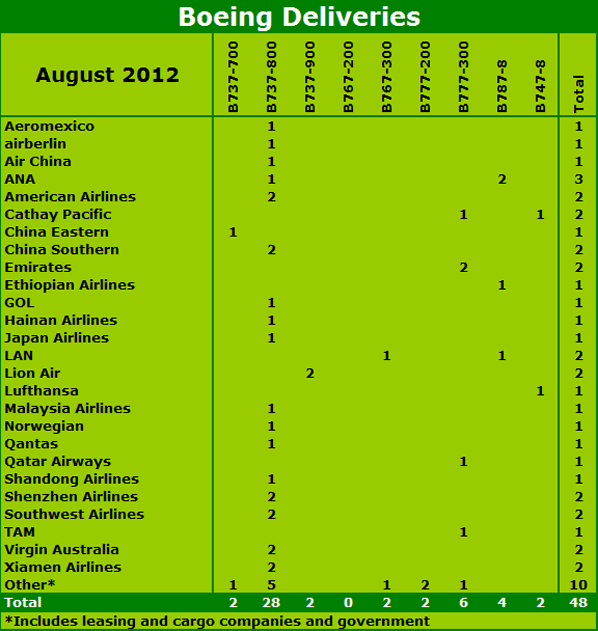 Boeing closed August with a total of 48 units delivered, three more than in July, but exactly the same number as in August 2011.

Airlines received a total of 32 narrowbodies from the American air framer, one less than in the preceding month. Notably, no airline received more than two narrowbody units, although a total of seven carriers took delivery of more than one single-aisle unit from the American manufacturer. This includes three US carriers; American Airlines, Southwest Airlines and Virgin America, as well as three Chinese operators; China Southern, Shenzhen Airlines and Xiamen Airlines.

Four more widebody units were delivered in August than in July, and the American airframer doubled its year on year performance, delivering ten more large aircraft than Airbus in a single month. Notably, two airlines, Ethiopian Airlines and LAN, received their first 787s, while further two units were delivered to ANA, which now operates 13 Dreamliners. For a third consecutive month, Emirates was the only other airline to receive more than one widebody airframe last month, taking two 777-300s. While the carrier now has a 45-strong fleet of the type, further 75 units are yet to be delivered, leaving Boeing with a fair bit of work in the coming years. Notably, Cathay Pacific joined Lufthansa as operator of the new 747-8I, as both carriers received each one unit of the type.