Garuda Indonesia gradually re-establishing itself as a significant Asian airline; passengers up 22% in 2012 H1 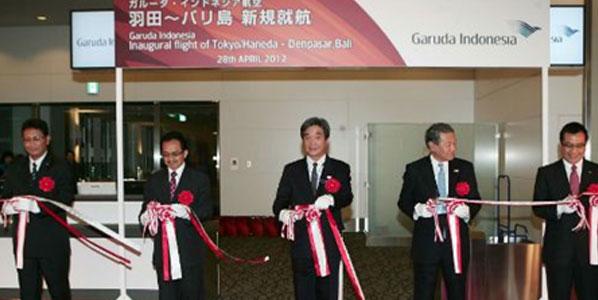 Although Garuda Indonesia has grown significantly in the last 12 months, Indonesia’s flag carrier has not started many new routes. One new service is from Denpasar (Bali) to Tokyo Haneda, which complements its high-frequency services to Tokyo Narita. Japan ranks as the airline’s third-biggest international market after neighbouring Singapore and Australia.

Indonesia’s flag carrier Garuda Indonesia is enjoying something of a comeback this year. Having been part of an EU blacklist that applied to all Indonesian carriers, two months ago the airline was recognized as the World’s Best Regional Airline by Skytrax, based on the results of a survey of 18 million passengers worldwide. In the fast-growing and highly competitive Indonesian domestic market, which includes carriers such as Lion Air and Indonesia AirAsia, Garuda reported a 40% growth in domestic traffic last year (to 12.2 million) while its low-cost subsidiary Citilink reported 42% growth in passengers to 1.6 million. Garuda’s international traffic was up 21% to 3.2 million.

In the first six months of 2012, the Garuda Indonesia group has reported continued rapid growth transporting a total of 9.6 million passengers, up 22.4% compared with the first half of 2011.

At the end of June, Garuda’s fleet comprised 65 narrowbody 737s (mostly -800s), while the widebody fleet consisted of three 747-400s, eight A330-200s, and six A330-300s. The Citilink fleet has more than doubled in the last 12 months with the addition of seven A320s to the existing six 737s. Its network consists of 10 domestic routes which it operates with an average of three daily flights. 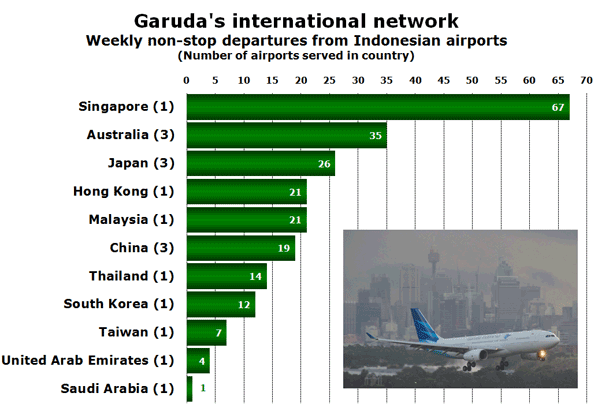 Garuda flies non-stop from Indonesian airports to three different airports in Australia (Melbourne, Perth and Sydney), China (Beijing, Guangzhou and Shanghai) and Japan (Osaka Kansai, Tokyo Haneda and Tokyo Narita). Although the EU’s ban on Garuda Indonesia has now been lifted, the carrier’s only service to Europe is currently to Amsterdam, via Dubai, which it relaunched in June 2010. In the near future, the airline set to become a SkyTeam member plans to start services to India and add more destinations in Europe (Frankfurt, London, Paris and Rome) before targeting the US West Coast. These routes will be possible once the airline starts receiving its first 777-300ERs (due in 2013) and further A330-300s which it has on order.