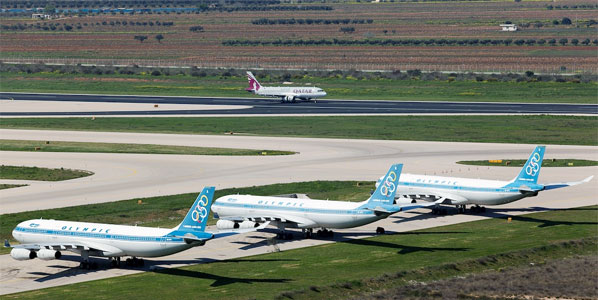 July also saw the sale of Olympic’s A340 fleet, once the glory of its long haul route network, but parked and decaying at Athens Airport since 2009. The $40 million bargain price tag made headlines as one of the first moves of the Greek government to reduce its debt. Photo: Alex Filippopoulos.

Greece’s troubled economy is more reliant that many in Europe on in-bound tourism. Latest figures from the Hellenic Civil Aviation Authority for the peak month of July show that passenger numbers across all Greek airports are down 4.3% compared with last July, but are above the level of July 2009 and July 2010. However, if we exclude Athens (the country’s busiest airport where passenger numbers fell by 12% in July), traffic levels at all other Greek airports combined is down just 1.3% compared with July 2011. 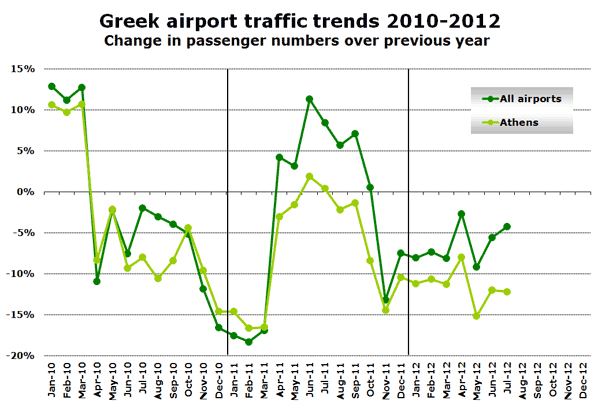 Seasonality is a major issue at Greek airports due to the dominance of the inbound tourism market during the summer, especially in July and August. Across all Greek airports, almost one-third of all annual passengers are handled in just these two months, with Mykonos receiving over half of its annual traffic last year during this period. 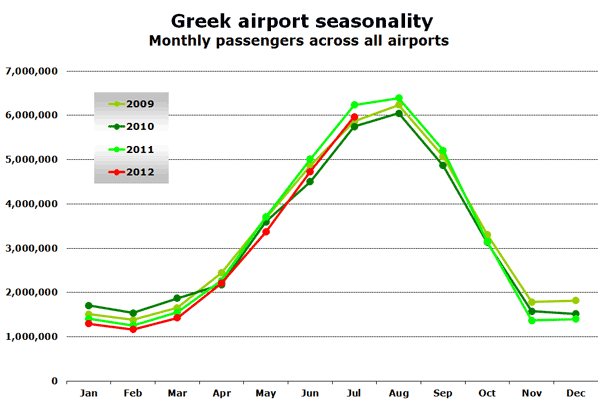 Athens International Airport is still 50% busier than any other Greek airport during July, handling almost 1.5 million passengers of which two-thirds are on international routes (down 12.6%) and one-third on domestic routes (down 9.6%). 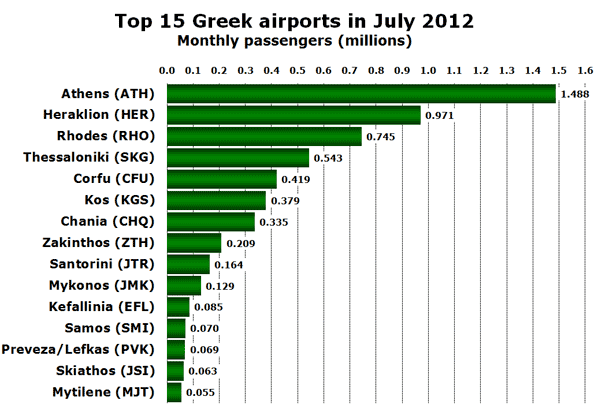 Heraklion (on the island of Crete) and Rhodes are the next busiest airports, and are heavily reliant on inbound tourism. Both airports handled 15-times more passengers in July than they did in January.

Kefallinia reports double-digit growth thanks to easyJet and Ryanair

Among Greece’s top 15 airports in July, eight of them reported a reduction in year-on-year traffic, while seven reported growth. The fastest-growing Greek airport this summer is Kefallinia (also known as Kefalonia), located on one of the Ionian Islands to the west of the Greek mainland. In July, passenger numbers were up almost 20% thanks in part to the launch earlier this year of new low-cost services from London Gatwick (with easyJet), Milan Bergamo (Ryanair), Milan Malpensa (easyJet), Oslo (Norwegian) and Pisa (Ryanair). 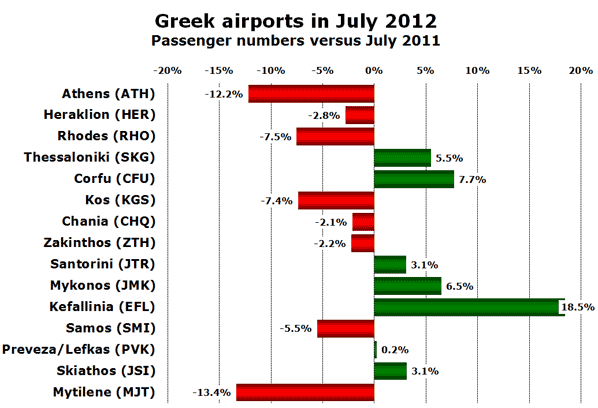 According to anna.aero’s new route database, there have been around 80 new services launched by Europe’s LCC to Greek airports since the start of the summer season. Apart from the already mentioned easyJet, Norwegian and Ryanair, other LCCs to have identified opportunities in the Greek market this year include blu-express, bmibaby, Jet2.com, Monarch, SmartWings, Volotea, Vueling and Wizz Air. Ryanair accounts for some 35 new services with easyJet responsible for a further 13.