Although Lufthansa has grown considerably at Berlin Tegel, where the airline planned to take advantage of the now delayed opening of Berlin Brandenburg Airport, the German flag carrier is still bigger at its three hubs in Frankfurt, Munich and Düsseldorf, as well as in Hamburg.

As Lufthansa’s management and its cabin crew unions prepare for further talks to resolve their differences and avoid further embarrassing and costly strikes, anna.aero this week takes a closer look at how the airline’s network has evolved in the last 12 months. Unlike most other European flag carriers, Lufthansa operates a dual-hub strategy with major operations at both Frankfurt and Munich. In terms of aircraft movements, Düsseldorf ranks a distant third with almost two-thirds fewer flights than Munich.

Among the airline’s current top 15 airports in terms of movements the biggest changes have occurred at Berlin Tegel (as Lufthansa planned to grow considerably to take advantage of the now much-delayed opening of Berlin Brandenburg Airport), Stuttgart (where Lufthansa has transferred a number of services to its in-house LCC germanwings) and Milan Malpensa (where the airline’s subsidiary Lufthansa Italia operated from February 2009 to the end of October 2011). German airports (shown in light green) account for eight of the top 15 airports. 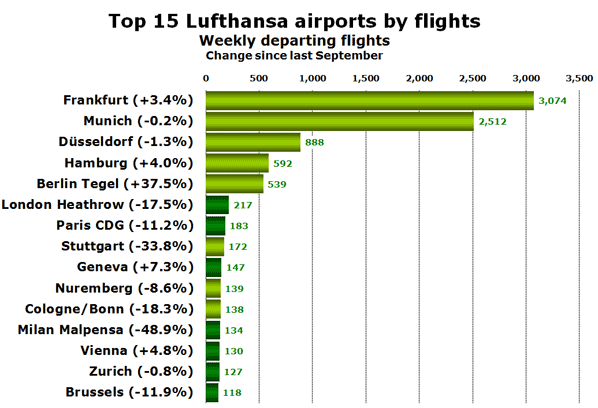 Lufthansa’s busiest non-German airports are London Heathrow and Paris CDG, although both have seen double-digit cuts in the number of weekly flights. In the last 12 months, Lufthansa has axed flights to Heathrow from Cologne/Bonn, Dresden, Milan Malpensa and Stuttgart, while starting flights from Berlin Tegel and adding an extra daily frequency on its Frankfurt and Munich services. Paris’ reduction is mostly due to the removal of Milan Malpensa flights. Across its entire network, the number of weekly flights in September is up just 0.3% compared with last September.

If instead of analysing weekly flights the metric of capacity as measured by ASKs (Available Seat Kilometres) is used then a different pictures emerges of Lufthansa’s biggest airports. Frankfurt is now twice the size of Munich thanks to the airline’s wider network of long-haul flights from its primary hub. And even Munich is now five times ‘bigger’ than Düsseldorf. Long-haul destinations served with multiple daily flights using widebody aircraft now feature prominently in the top 15, with five US airports making the top 15. The five non-US and non-German airports in the top 15 are Beijing, Hong Kong, Shanghai, Singapore and Tokyo. 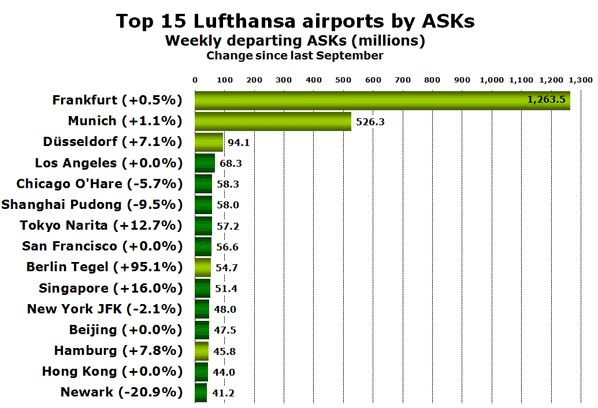 The rapid growth at Berlin Tegel is even more noticeable in terms of ASKs than with movements, with an almost doubling of capacity at the airport in the last 12 months.

New routes already announced starting this winter include Berlin Tegel – Innsbruck, Munich – Cape Town (moved from Frankfurt), and Munich – Rotterdam, while next summer should see the launch of direct flights between Munich and Mexico City.