Air Transat, the ninth-biggest airline in the North Atlantic market this summer according to anna.aero’s recent analysis, first took off almost 25 years ago as pure charter carrier. Owned and operated by the Montreal-based tour operator Transat, the airline continues to provide charter services to its parent company, but also markets its seats to individuals. Preparations for the 25th anniversary include a complete makeover of Air Transat’s fleet of 12 A330-series aircraft, as well as significant upgrades to the 11-strong fleet of A310s, but the airline seems to be faring well regardless; as recently as this last July, it was named the world’s best leisure carrier by Skytrax. 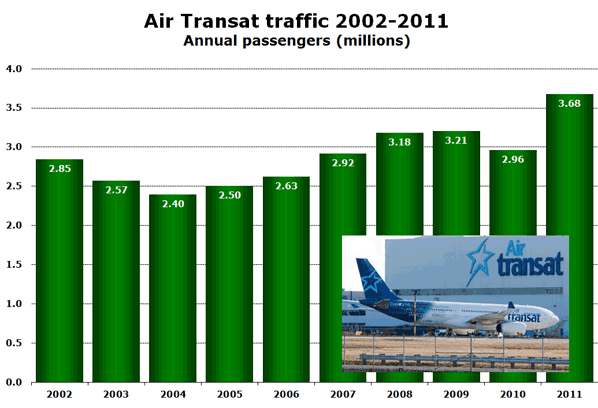 Air Transat’s focus on charter operations is reflected in the carrier’s operating figures, as demand in the leisure sector proves highly reactive to economic conditions. The airline carried 2.85 million passengers in 2002, but two economic crises later, in 2010, it managed only 4% more than that. However, the 2010 passenger numbers were better than the 2004 low by almost a quarter and almost 8% lower than the 2009 high.

2011 saw a strong recovery in the demand and Air Transat’s traffic increased to an all-time high of almost 3.7 million annual passengers. However, due to increased fuel and restructuring costs, the airline posted a net loss of USD 7.4 million last year, down from a USD 55 million profit the year before.

Air Transat’s sizeable charter operation dictates two very distinct route networks during summer and winter, as the capacity allocation shifts with the seasons. In the summer, flights to European destinations make up for almost 94% of the airline’s capacity. In fact, the top eight summer country markets involve European countries, with United Kingdom and France (five and seven destinations served respectively in August 2012) alone accounting for over half of weekly seats and frequencies. 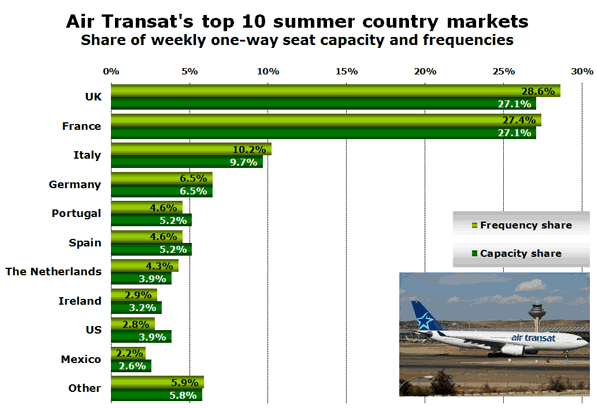 In winter, Air Transat transforms its network dramatically, with only 15% of the airline’s capacity remaining allocated to European routes. Conversely, 74% of seats in January 2013 are allocated to winter sun routes in the Caribbean. This number increases by further 10% if including the US, where Air Transat serves the Florida destinations Orlando and Fort Lauderdale with a total of 16 weekly flights from five Canadian airports. 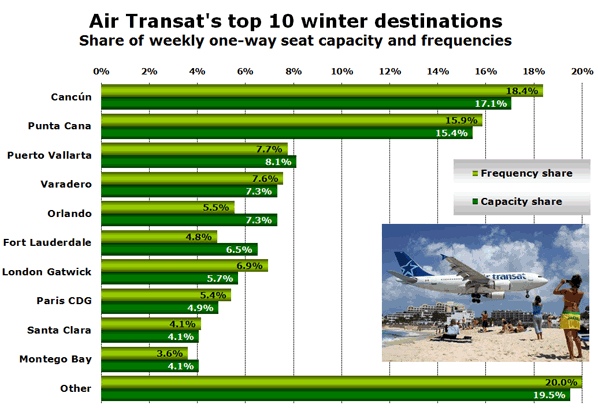 Somewhat unsurprisingly, Cancún is the busiest winter destination, and Air Transat dedicates 18% of its weekly capacity to serve it from eight Canadian airports, although mostly with low-frequency services (only Montreal and Toronto have more than twice-weekly services). Further five Mexican destinations will be offered by Air Transat during winter 2012/13, making it the airline’s largest winter country market (30% of capacity).

Punta Cana (Dominican Republic), Varadero (Cuba), and the two Florida airports (Orlando and Fort Lauderdale) each have a larger capacity share than London Gatwick, Air Transat’s biggest European destination this winter. Notably, only four other European cities will be served this winter (compared with 25 this summer): Paris with six weekly flights, as well as Lisbon, Manchester and Glasgow, each with a single weekly frequency.