Australian domestic air traffic up 2.5% in first half of 2012; international traffic up 5.2% In the first half of 2012, Sydney welcomed two long haul low-cost airlines; AirAsia X and Scoot. In spite of Tiger Airways Australia rebuilding its domestic network, Australian international traffic is growing faster than the domestic segment.

The Australian domestic air travel market has remained relatively robust and stable in recent years with annual passenger numbers growing every year since 2006. Last year’s modest growth of just 0.5% (to 54.3 million) was impacted by a number of factors including an ash cloud from a Chilean volcano in June, the temporary grounding of Tiger Airways in July (followed by its slow rebirth), and industrial action by staff at Qantas in October. In the first half of 2012, passenger demand has risen by 2.5% to almost 27 million passengers as Tiger Airways has continued to slowly rebuild its network. 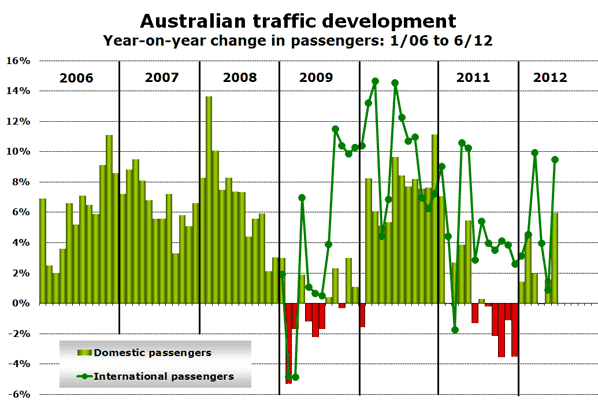 A number of new domestic routes were launched in the first half of 2012, including Virgin Australia’s daily services from Sydney to Darwin, and Tiger Airways’ resumption of flights between Melbourne and Cairns.

International traffic up 5.2%, AirAsia X and Scoot arrive in Sydney

Since March 2009, international traffic has grown year-on-year every month with the exception of March 2011. New international services launched in the first half of 2012 include:

In addition, Qatar Airways launched flights to Perth from Doha on 3 July, while in November, Adelaide will get non-stop flights to Dubai with Emirates.