Alitalia’s former second hub at Milan Malpensa is now a low-cost stronghold; new LCCs like Wizz Air have been welcomed in the last year, and easyJet and Air One are already the biggest airlines. However, Alitalia also has a considerable long haul network at the airport and all three MEB3 carriers are present.

Italy’s second busiest airport, Milan Malpensa, has been going through an interesting period in its development. The completion of a major new terminal in 1998 encouraged Alitalia to create a second hub at the airport to complement its existing Rome operations. Passenger numbers grew rapidly from 3.5 million in 1997 to 20 million just three years later with around half of that growth coming from the reallocation of flights from Milan Linate. However, as Alitalia’s fortunes declined, easyJet arrived and established a major base at the airport in March 2006, helping to boost passenger numbers to almost 24 million in 2007. Alitalia then decided to basically close its Malpensa hub in 2008 after which Lufthansa created Lufthansa Italia, which started operations in early 2009 and closed at the end of the summer 2011 season. 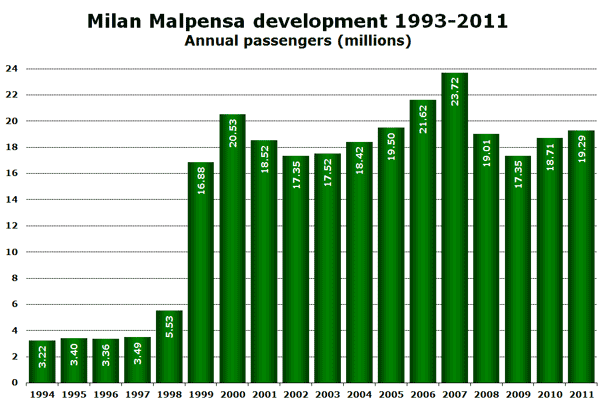 As a result of Lufthansa Italia’s closure, passenger numbers are down 3.6% in the first seven months of 2012.

Alitalia using Air One to grow presence once again 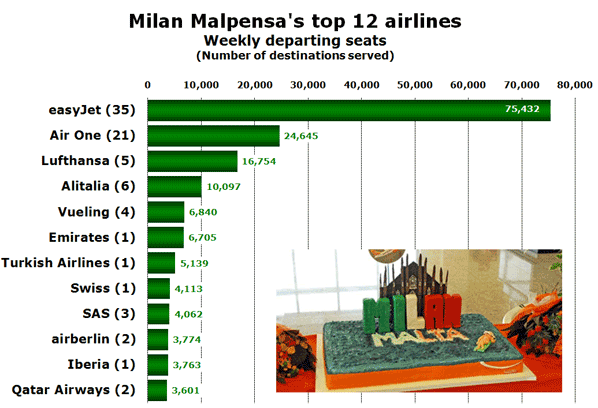 Despite Air One’s growth, easyJet remains three times larger in terms of weekly seats, operating this September to some 35 destinations across Europe (in August this was 45 due to a number of very seasonal routes primarily to Greece), followed by Air One and then Lufthansa, which offers multiple daily flights to Düsseldorf, Frankfurt, Hamburg and Munich, but has just this week transferred its Stuttgart flights to its low-cost subsidiary germanwings.

Analysis of schedule data by destination reveals that while domestic routes still rank first, followed by Europe’s four other big country markets (Spain, Germany, UK and France), the next biggest country market is the United Arab Emirates, thanks to Emirates and Etihad. The US ranks just two places further back in eighth. 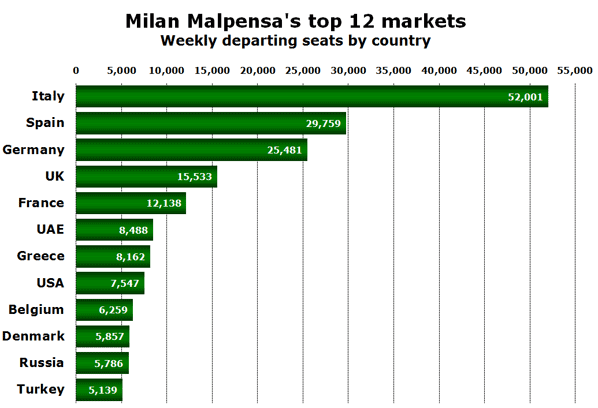 Over 20 new services launched in the last 12 months

During the last 12 months, several airlines have launched new services to and from the airport. In addition to Air One’s network expansion, there have also been new services launched by Air Europa (to Madrid), Air France (to Marseille), easyJet (to Alghero, Kefalonia, Kos, Zakynthos), germanwings (to Stuttgart), Monarch (to Birmingham, London Gatwick and Manchester), Norwegian (to Copenhagen), SAS (to Stockholm Arlanda), Transaero (to Moscow Vnukovo and St. Petersburg) and Wizz Air (to Bucharest Otopeni and Budapest).