South African Airways focuses expansion to its intra-African network, which has led Zambia to become its biggest international country market. However, the intercontinental network is not left unadjusted. Beijing is the Star Alliance airline’s latest addition from Johannesburg, while long haul operations from Cape Town are dropped.

South African Airways has ranked as Africa’s largest airline for decades, but this is a status that it may soon lose as other airlines on the continent are expanding faster. This year, Egyptair offers approximately the same number of seats in its schedules as its South African Star Alliance partner, having grown seat capacity by almost 90% in the last decade. This compares with South African Airways’ growth of 6% during the same time period. Meanwhile, airlines such as Royal Air Maroc, Ethiopian Airlines and Kenya Airways have grown even faster and more than doubled their capacity. 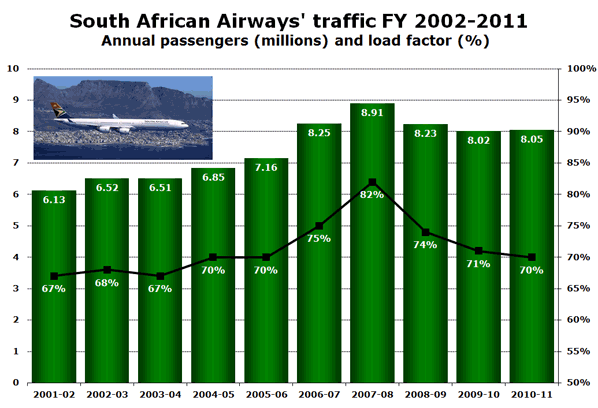 Having experienced a peak in its financial year ending 31 March 2008, South African Airways has since seen passenger numbers and load factors fall back somewhat. During the same time period, the airline’s seat capacity has been relatively stable, which explains why load factors have fallen along with passenger numbers. 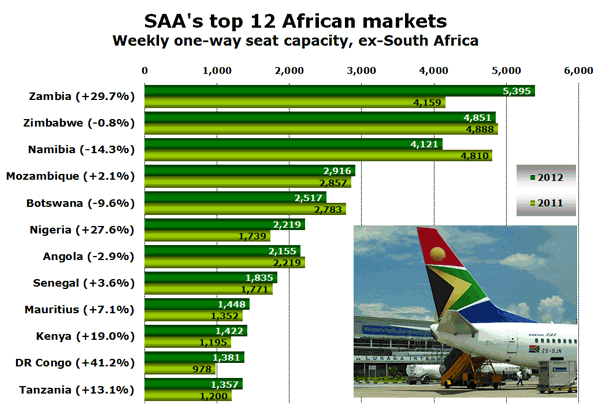 In the last year, South African Airways has grown its overall intra-African seat capacity by 11%. The Zambian market has climbed from third place to be South African Airways’ biggest African market. Although the airline added a new route to Zambia, from Durban to Lusaka in July, it merely adds 200 weekly seats to the market. Instead, the majority of growth comes from capacity increases on two existing routes from Johannesburg; to Lusaka and Ndola.

Of SAA’s new routes launched in the last year, as detailed in the table below, all but one (Beijing) are intra-African services; and with 20 A320s in Airbus’ order book, it appears that the airline aims to continue growing in the short and medium haul segment. The airline’s narrowbody fleet currently consists of 11 A319s, two A320s and 15 737-800s.

In the last year, capacity to Europe has been reduced by 18%. Of the airline’s four European routes last year, services between Cape Town and London Heathrow have been dropped, meaning that the airline no longer serves Cape Town with intercontinental flights, which now are all consolidated at the airline’s Johannesburg hub. The three remaining European routes are to London Heathrow, Frankfurt and Munich. Seat capacity on the Munich route has, however, been reduced by 20% since last year.

During the same time, South African Airways has boosted its Asian network by 41%, taking advantage of increased traffic flows between the Asian and African continents – as well as connecting traffic onward to its two South American destinations São Paulo in Brazil and Buenos Aires in Argentina. South African Airways now serves three Asian airports non-stop from Johannesburg; Hong Kong, Mumbai and Beijing. Mumbai has increased from four to six weekly flights in the last year, while Beijing – the hub of SAA’s Star Alliance partner Air China – is a new route launched in January.

The 11,700-kilometre route to Beijing is, however, not the airline’s longest operation. In North America, South African Airways serves New York JFK non-stop – a distance of 12,825 kilometres from Johannesburg. The airline also serves Washington Dulles in the United States; however, flights operate via Dakar in Senegal. Remaining to be mentioned of SAA’s 11 intercontinental destinations is Perth in Australia.