Bordeaux Airport has now welcomed seven routes on the new airline Volotea, making it the airport’s fourth-biggest airline. However, Air France still has around 50% of the airport’s seat capacity – and routes to Germany are still curiously missing. 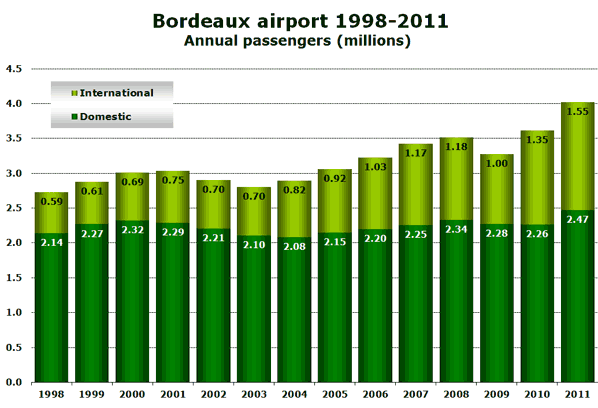 So far in 2012 (January to August), non-transit passenger numbers are up an impressive 10.0%, with domestic traffic up 7.5%, and international scheduled traffic up 17.2%. Demand typically peaks in July as might be expected for an airport with a strong leisure market. This year, the airport has already welcomed new services from existing carriers Air France (to Barcelona), easyJet (to Lisbon, Madrid and Nice) and Ryanair (to Marseille), as well as newcomer Volotea who since 25 April have launched services to Ajaccio, Bastia, Ibiza, Malaga, Palermo, Toulon and Venice, with flights to Lille and Strasbourg beginning on 1 October, and Grenoble ski flights starting in time for Christmas. 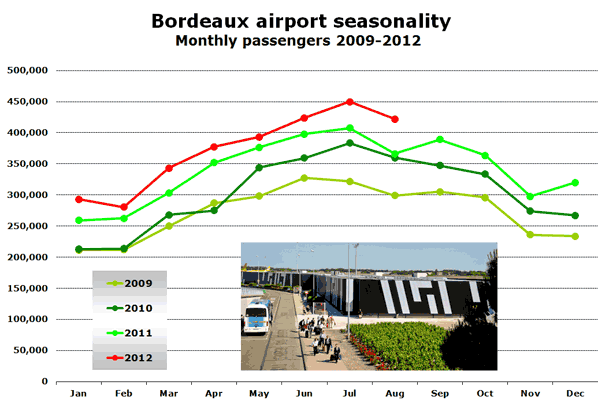 Passenger data for 2012 provided by the airport shows that the airport’s busiest route to Paris Orly has seen demand remain virtually unchanged while Paris CDG traffic is up 6%. Both of these routes remain Air France monopolies. The two fastest-growing routes among the airport’s 12 busiest routes are Marseille and Nice which have both been stimulated by the arrival of low-cost competition this summer; Ryanair began daily Marseille flights on 25 March, while easyJet launched four-times weekly Nice flights on 30 March. 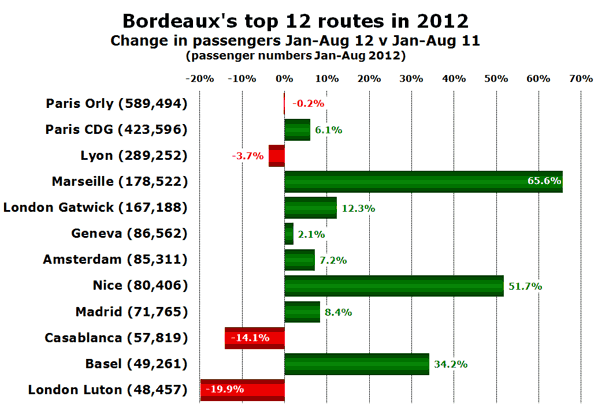 Thanks to its dominant position on the key trunk routes to Paris, Air France still has around 50% of the airport’s seat capacity, spread across nine domestic routes, and two international routes to Barcelona and Rome. easyJet currently serves 11 destinations in six countries (although Madrid flights end in November), and only competes directly with Air France on flights to Lyon and Nice. Ryanair is now the third busiest airline serving seven destinations in six countries, while newcomer Volotea also serves seven destinations in France, Italy and Spain. European flag-carriers include Aer Lingus (to Dublin), British Airways (to London Gatwick), Iberia (to Madrid), KLM (to Amsterdam) and TAP Portugal (to Lisbon). There are currently no scheduled services to anywhere in Germany, while Scandinavian services are limited to seasonal flights between June and August.

Next June, Bordeaux Airport will host the 10th edition of FrenchConnect, the event that focuses on new route development at French airports. From 30 June to 2 July, air transport executives from airlines, airports and suppliers from across Europe will be able to hear presentations about developments in the French and European markets and arrange meetings with existing or potential partners.