Having launched four new routes from London City Airport in May, British Airways has now reshifted capacity from its seasonal routes to make space for the two latest new routes to Venice and Aberdeen.

British Airways continues to evolve its operations at London City Airport, the UK capital’s only ‘downtown’ airport located in Canary Wharf. The vast majority of its routes are operated by BA CityFlyer (a wholly-owned BA subsidiary) using Embraer E-jets, but the airline’s highest-profile route to New York JFK (using an A318) is operated by British Airways itself and Billund in Denmark is operated by BA franchise partner Sun-Air.

This month has seen the launch of two new destinations; Aberdeen in Scotland and Venice in Italy. British Airways already serves Aberdeen from London Heathrow with 13 daily flights on weekdays, and also serves Venice daily from both London Heathrow and London Gatwick. These two new routes at London City to some extent replace the capacity lost by the ending of seasonal routes this summer to Menorca in Spain, and Angers and Quimper in France, routes which were launched at the end of May.

One route that failed to deliver was Copenhagen, which was launched in September 2010 and operated 11-times weekly but was last operated on 25 May 2012.

According to UK CAA data, the New York JFK service (which operates with a technical stop in Shannon on westbound flights only) carried 21,622 in 2011, up 12% on the previous year. Two 32-seat A318s are used on the route. 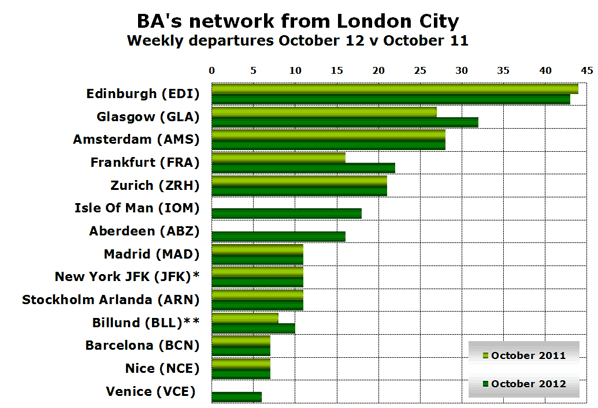 Edinburgh remains the airline’s leading route with regard to weekly frequency, followed by Glasgow and Amsterdam. With the addition of Aberdeen and the Isle of Man this year, domestic routes now account for over 40% of weekly flights. British Airways branded flights currently account for around 40% of the airport’s total seat capacity, with Air France marketed flights (operated by CityJet) representing just over 30%, while Swiss accounts for 15% with its flights to Basel, Geneva and Zurich.

Passenger numbers at London City Airport (which handled just under three million passengers in 2011) were up in the first five months of this year, but down in the period June to August.