Second quarter growth at Vancouver was assisted by the launch of Virgin Atlantic’s entirely new London-Heathrow route in May in a ceremony presided over by a completely unknown, bearded airline executive.

Passenger traffic data for the second quarter of 2012 for 10 of Canada’s busiest airports reveals that demand is up 3.2%, down from 5.4% in the first quarter of the year. The best performing airports were Edmonton (+5.4%), Calgary (+5.3%) and Winnipeg (+5.1%). Two airports, Halifax and Montreal, both reported a fall in demand in May and June, but thanks to good performances in April were both just able to maintain positive growth in Q2. However, both airports also saw traffic declines in July, something that was also reported by Ottawa and Victoria airports. The good news is that all five airports who have so far reported traffic in August (including Halifax, Ottawa and Victoria) have seen demand grow compared with last August. 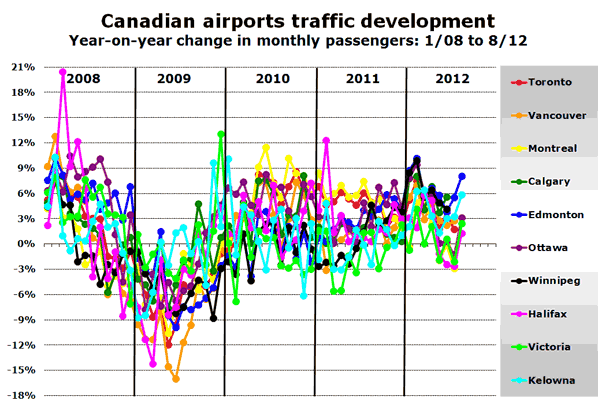 Canada’s two busiest airports, Toronto Pearson and Vancouver, have both reported second quarter growth of between 3% and 4%.

The eight busiest Canadian airports all break down their traffic figures into domestic, transborder (US) and international (non-US). A graph of 2012 year-to-date ‘growth’ for each airport by region reveals that domestic traffic is up at all eight airports, by between 1.5% (Halifax) and 8.2% (Winnipeg). 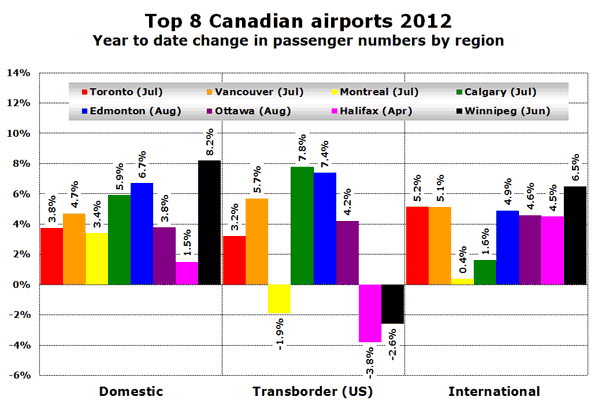 The US market has seen growth at five of the eight airports, with Halifax, Montreal and Winnipeg reporting a fall in transborder passenger numbers. Calgary leads the way in this segment with growth of 7.8%, just ahead of Edmonton (+7.4%). All eight leading airports have seen growth in (non-US) international traffic so far in 2012, with Winnipeg leading the way with passenger numbers up 6.5%.

Based on analysis of OAG schedule data for September, Toronto City airport is now the ninth busiest airport in the country, with Quebec airport tenth. In the first eight months of 2012 Quebec airport has seen passenger numbers rise by 2%. Last year the airport handled just over 1.3 million passengers. A total of 226 airports in Canada currently offer scheduled services.

The following new services have already started in 2012 from Canada’s main airports: