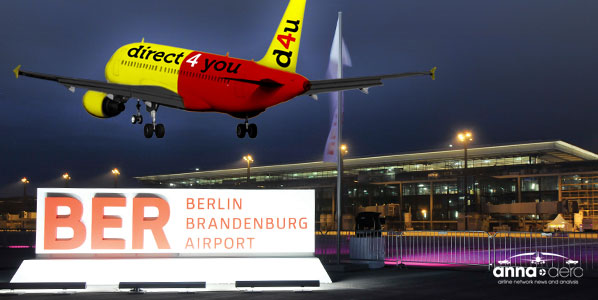 World exclusive: Here’s what Lufthansa’s new Direct 4 You could look like (according to an anna.aero computer simulation). When Germany’s capital city airport finally opens next year, it will be mainly served by the new low-cost airline rather than mainline Lufthansa planes.

Last week, Lufthansa said that from 2013 it plans to create a brand new airline by combining its low-cost subsidiary, germanwings, with all of its non-hub Lufthansa services – all those services NOT operated from Frankfurt and Munich. The impact of this new entity will be felt a lot more at some airports than others, especially Berlin, Düsseldorf and Hamburg.

The new airline emerging from Lufthansa’s strategic review of European operations is currently un-named – perhaps LHwings? The review project itself was cunningly codenamed “Direct 4 You” after the ‘4U’ germanwings designator and, according to Lufthansa, it will operate a fleet of around 90 aircraft, and carry 18 million passengers in its first year.

anna.aero has analysed Lufthansa’s current operations at all of its German airports to see the mix between services to Frankfurt and Munich, other Lufthansa-branded routes, and germanwings flights. 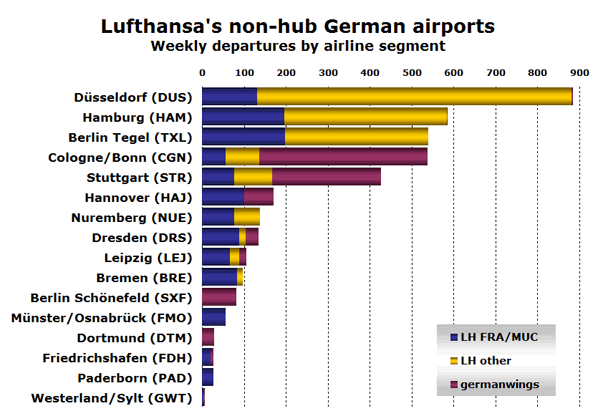 At several German airports (including Hannover), the only change will be that the existing germanwings routes will be rebranded under the new airline’s name. The two biggest airports in the germanwings network (Cologne/Bonn and Stuttgart) have already seen some ‘handing over’ of routes from Lufthansa to germanwings. The remaining non-hub Lufthansa routes at these two airports are nearly all domestic routes to destinations like Berlin and Hamburg – services which will now be operated by the new airline.

Berlin to get low cost treatment

The biggest change will be seen and felt at Berlin, Düsseldorf and Hamburg where germanwings has virtually no presence (apart from in Berlin Schönefeld, and even there it has been handing over routes to Lufthansa to operate from Tegel). The Frankfurt and Munich ‘hub’ routes will remain Lufthansa-branded, but well over 60% of Lufthansa’s flights in Berlin and Hamburg, and over 80% in Düsseldorf, will transfer to the new airline. However, the three long-haul routes from Düsseldorf to Chicago, Newark and Toronto will continue to operate as Lufthansa.

Generally, this is not the best news for Berlin’s new airport, now expected to open in October 2013. Obviously, there was a strong desire that Lufthansa would have a major presence at the German capital city’s new airport – and this did seem to be happening with Lufthansa taking over many of germanwings’ services to the city, combined with the launch of 30 new Lufthansa routes in early June when the new airport was expected to be ready. In the end, when it finally does open, the airport will be served mostly by Lufthansa’s new airline, which will presumably be more germanwings than Lufthansa.