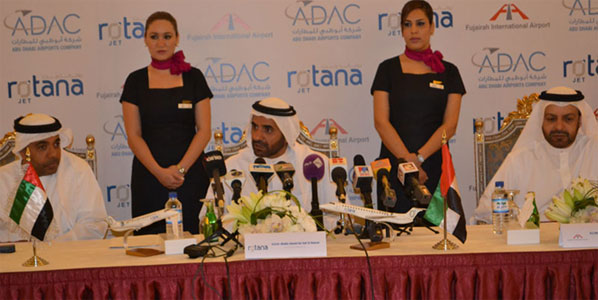 In 2012 alone around 30 new international routes have been added to the UAE’s networks. September also saw the launch of the UAE’s own domestic airline: Rotana Jet (chaired by Dr Sheikh Ahmed bin Saif Al Nahyan; pictured) will operate from Abu Dhabi to Al Ain (100km) and Fujairah (200km); allegedly fares will be cheaper than taxi rides.

In just a decade, passenger numbers at the three main airports of the United Arab Emirates (Abu Dhabi, Dubai and Sharjah) have grown almost fourfold from 18 million in 2001 to 70 million in 2011. Leading the way with around three-quarters of the traffic is Dubai, which last year handled over 50 million passengers for the first time, making it the world’s 13th busiest airport for the second year running. Abu Dhabi airport’s passenger numbers are only around one-quarter of that of Dubai, but demand grew by almost 13% last year thanks to the on-going growth of Etihad Airways. Sharjah is the third main airport in the UAE and is home to Air Arabia, the region’s oldest low-cost carrier. 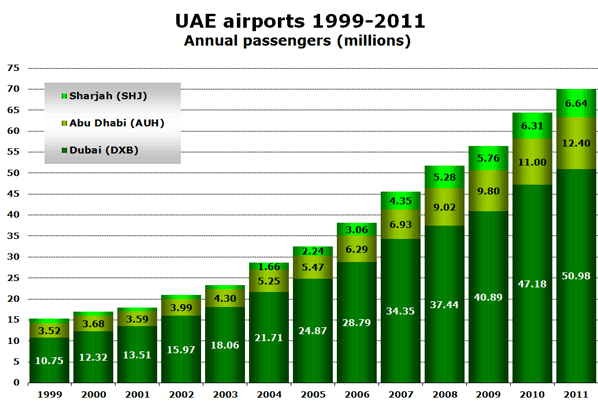 Emirates, Etihad and Air Arabia have 60%, 70% and 80% respectively of capacity at their home airports, with Emirates serving well over 100 destinations non-stop, Etihad 70, and Air Arabia over 50. Emirates operates an all widebody fleet, Etihad a mixture of twin-aisle and single-aisle aircraft while Air Arabia operates only A320s.

Combining flight data across all three of the nation’s main airports reveals that the Indian market is currently over 50% bigger than the next biggest country market, Saudi Arabia, and twice as big as the third-ranked UK market. The fastest-growing market has been Saudi Arabia, which has seen capacity growth of 35% in less than a year. The Thailand market has grown almost 25% thanks primarily to airberlin re-routing its non-stop flights from Germany to Bangkok via Abu Dhabi, home of its new equity partner Etihad. The Australian market is likely to see major growth in the next 12 months now that Qantas has entered into a partnership with Emirates. 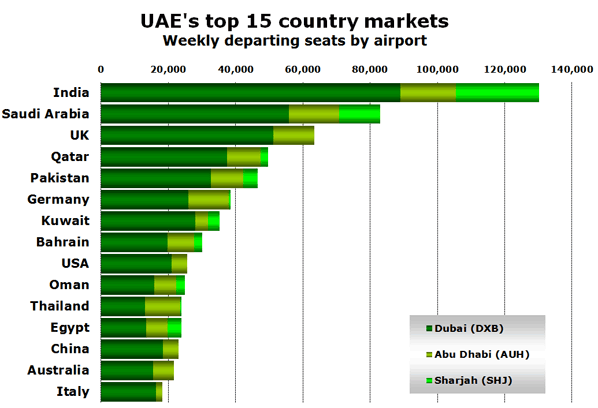 An interesting development in the UAE has been the recent launch of domestic flights by Rotana Jet from Fujairah and Al Ain to Abu Dhabi. Both routes will be served double-daily with 50-seat Embraer 145s, despite the fact that Fujairah is less than 200 kilometres from Abu Dhabi, and Al Ain is just 100 kilometres.