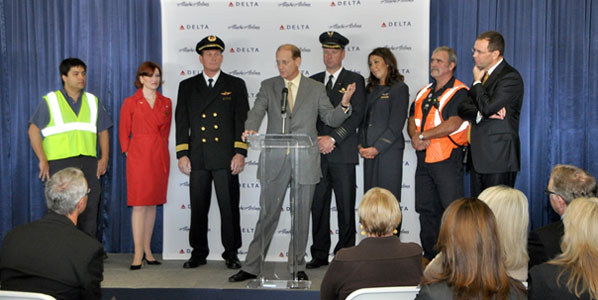 Two airlines on one podium: Delta Air Lines’ Pacific expansion out of Seattle, here presented by the airline’s CEO Richard Anderson, involves a new route to Shanghai Pudong, the hub of Delta’s SkyTeam partner China Eastern. On the right is Bradley Tilden, CEO of Alaska Airlines, which will provide feed to Delta’s intercontinental network.

It was announced this week that Delta Air Lines is ramping up its presence in Seattle in the US Pacific Northwest. Although the airline’s presence at the airport is not that of a hub operation, Delta does already operate five intercontinental routes out of Seattle; Amsterdam, Paris CDG, Osaka Kansai, Beijing and Tokyo Narita – three of which have been launched in the last 2.5 years. Supporting this network is a domestic network of only seven routes, mostly from Delta’s hub airports; however, the airline has also announced a deepened partnership with Seattle’s dominant airline Alaska Airlines, which currently provides a feeder network of 66 routes.

Next year, Delta is looking to expand its Seattle operations with two new routes across the Pacific Ocean. In addition to boosting capacity by 26% on the Tokyo Narita route as a result of switching aircraft type from 298-seat A330-300 to 376-seat 747-400, Delta is applying to the US DOT for rights to also serve Tokyo Haneda from 30 March. The daily operation would replace the route to the Japanese capital’s downtown airport from Detroit that Delta just dropped, currently leaving Delta with a service from Los Angeles to Haneda only. Delta would also be the only carrier on a Haneda route from Seattle, whereas it already faces direct competition from both United and ANA on the busy Narita route.

From 17 June next year – also subject to regulatory approval – Delta intends to launch its second route to China out of Seattle, operating daily to its SkyTeam partner China Eastern’s Shanghai Pudong hub with 208-seat Boeing 767-300ERs. Currently, Delta only serves Shanghai from Detroit and Tokyo Narita.

Speaking to anna.aero about the new route, Delta’s spokesman Trebor Banstetter said: “Seattle is a large local market with considerable business demand to China and Shanghai. With this service, we want to tap that demand as well as leverage our partnership with Alaska Airlines that provides feed in the same way as we do at our own hubs.”

Port of Seattle Commissioner John Creighton added: “Shanghai is one of the top unserved routes our community has been asking for. This continues to boost the profile of Seattle as a Gateway to Asia and this will benefit the entire region.” 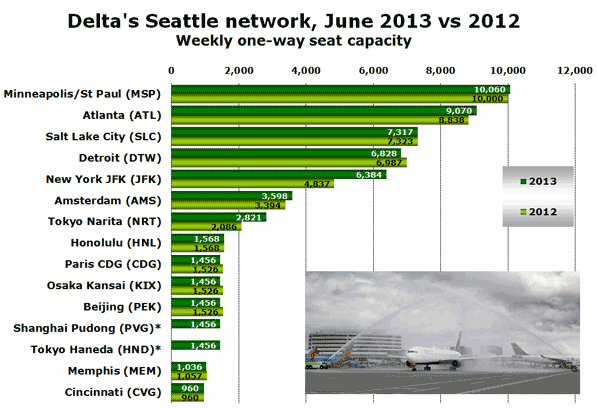 If both new routes are approved, this means that Delta next summer will offer more than 10% more seat capacity overall out of Seattle than it did this past summer.