The European regional airline market continues to evolve with some interesting developments in the last few months. These include:

The definition of a regional airline has become debatable (especially since the advent of regional jets). According to the membership of the European Regions Airline Association (ERA), a regional airline can be one of many things. The leading ERA member airlines in terms of passenger numbers so far in 2012 include so-called flag carriers (airBaltic and Olympic Air), members of global alliances (Aegean Airlines), wholly-owned subsidiaries of flag-carriers (Brit Air, KLM Cityhopper, Widerøe), independent airlines operating on behalf of other carriers (Air Nostrum, CityJet) or completely independent airlines operating their own networks (Binter Canarias, Malmö Aviation). Curiously, Europe’s acknowledged biggest regional airline, Flybe, is not a member of the ERA. 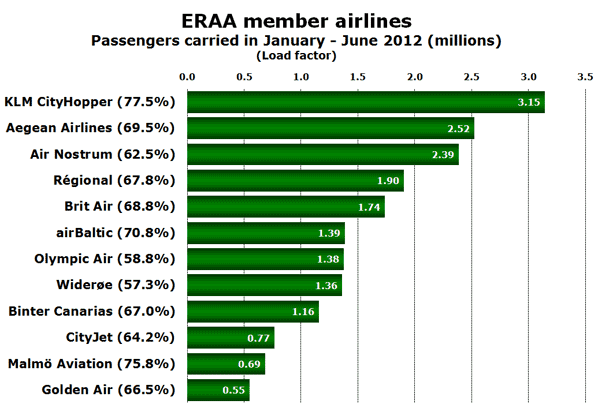 As can be seen from the graph, regional airlines tend to have lower average load factors (typically less than 70%), a natural result of operating smaller aircraft, and also the variation in demand associated with operating more business-focused networks. Monday morning and Friday evening flights may be easy to fill but it is significantly harder to find passengers for Wednesday mid-day flights. Resilient UK regional airline Eastern Airways has reported an average load factor of just 47.7% in the first half of 2012. To compensate for this the airline charges, for example, around £500 (€600) for a return trip between Bristol and Aberdeen (via Leeds) if booked at very short notice.

Although many of the smaller regional airlines use relatively fuel efficient turboprop aircraft these may not be considered appealing for longer sectors of over 90 minutes. With smaller aircraft, lower average sector lengths, and relatively low utilisation, unit costs for regional airlines tend to be quite high. Combined with a focus on business passengers this makes it difficult to stimulate demand with lower fares. ERA data for the first half of 2012 shows mixed fortunes for the organisation’s member airlines. The Romanian regional Carpatair has seen passenger numbers drop by 30%, CityJet by 28%, Olympic Air by 14%, airBaltic by 12%, and Eastern Airways by 11%. However, Air Nostrum, Estonian Air, Golden Air, KLM CityHopper, Malmö Aviation, Montenegro Airlines and Widerøe have all reported year-on-year growth in passengers.

IAG, the new owner of bmi British Midland, were unable to find a buyer for the airline’s low-cost subsidiary bmibaby, but were successful in selling bmi regional to Sector Aviation Holdings. The airline operates a fleet of 14 49-seat Embraer ERJ 145s and four 37-seat Embraer ERJ 135s, and has already announced two new routes (Manchester to Antwerp, and Bristol to Aberdeen) that will start at the end of October. The Manchester-Antwerp route was operated by CityJet on behalf of Air France until the middle of last month, while Aberdeen-Bristol was previously served by Eastern Airways until the end of September 2011. The airline’s winter schedule currently comprises the following routes from UK airports:

The recent demise of Air Southwest and “duo” shows that it’s hard work to make money in the regional airline business – so anna.aero applauds bmi regional, its new owners, the many new jobs it has pledged to create, and the new routes it has indeed already launched.

If taking over existing routes on an independent basis is a challenge for bmi regional, then starting new routes from a regional airport that has never served these markets is an even braver decision. Minoan Air, a recently launched Greek-based Fokker 50 operator, recently revealed plans to create a base at London Oxford Airport from early 2013. Initially it hopes to serve Amsterdam, Copenhagen, Dublin, Edinburgh and Munich. Of these only Edinburgh has previously been served from Oxford, by the short-lived Varsity Express. The Munich service appears to be targeting BMW employees as the German company’s Mini subsidiary has its main production line in Oxford.

An interesting new addition to the European regional airline scene is SkyWork Airlines based in Bern, Switzerland. It has grown rapidly in the last couple of years and now has a fleet of five 31-seat Dornier 328s, and five 72-seat Q400s. Thanks to a raft of new low-frequency leisure routes, the airline will serve 34 destinations from the airport next summer, making it by far the dominant airline at the picturesque airport that serves the Swiss capital.

Many questions left unanswered for 2013

The European regional airline market is bound to evolve further in 2013. Some of the questions which will be answered next year include: