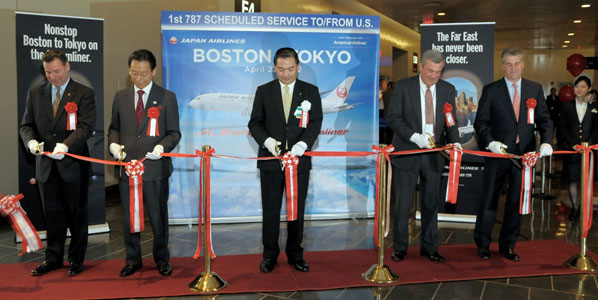 Last month, Japan Airlines (JAL) emerged from bankruptcy, after a major restructure that involved cutting staff numbers, routes and aircraft. In 2006, the airline carried almost 56 million passengers. Last year, it was just over 35 million. The good news is that the airline reported a healthy operating margin in the first quarter of 2012, and passenger numbers are set to rise this year. The airline has also taken delivery this year of the first six (of over 40) 787s that it has ordered from Boeing. 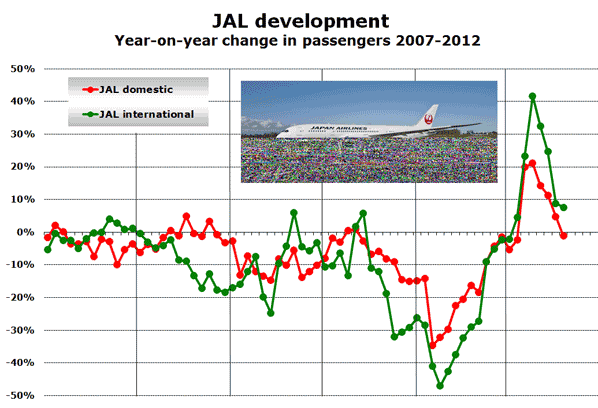 JAL’s domestic passenger numbers have been declining gradually for a number of years, with this year’s surge between March and July explained by last year’s drop in domestic traffic following the earthquake/tsunami. Latest figures for August 2012 reveal that the airline transported almost 2.9 million domestic passengers, down 30% compared with August 2006. The almost 700,000 passengers carried on international flights in August represents a fall of 44% from six years ago.

Analysis of JAL’s top routes in October 2006 (based on ASKs – Available Seat Kilometres) reveals how significantly the airline’s network structure has changed. Five of the top 15 airport-pairs from just six years ago are no longer served, while a further six have seen capacity cuts of at least 25%. Even two of the top three domestic routes (highlighted in pale green) have seen capacity cuts, with only the Tokyo Haneda – Okinawa route seeing an increase in capacity. 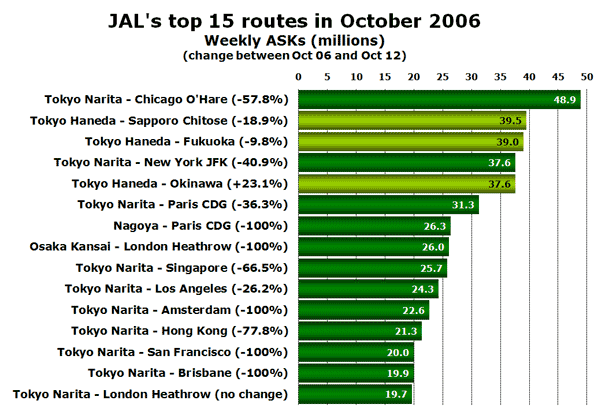 The recently completed expansion of Tokyo’s more convenient airport at Haneda has enabled JAL to resume international services from the airport. Among the airline’s top ‘new’ routes (routes operated in October 2012 that were not operated in October 2006), five are international routes from Tokyo Haneda (highlighted in pale green). Four of these routes (to Hong Kong, Paris, San Francisco and Singapore) saw the biggest drops in capacity from Tokyo Narita. 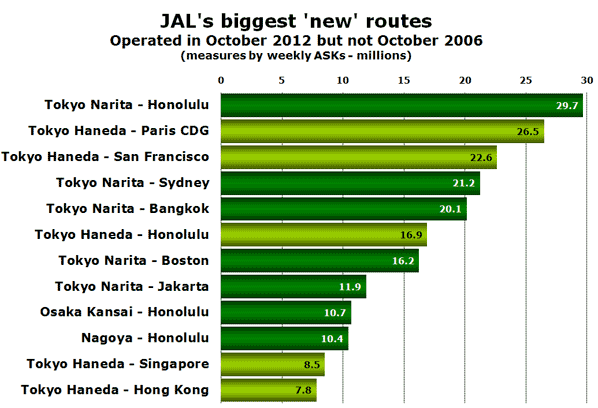 Also among the airline’s biggest ‘new’ routes are services to Honolulu in Hawaii from Nagoya, Osaka Kansai, and Tokyo (Haneda and Narita). These routes were all launched at the end of 2010. Special mention should be made of the Tokyo Narita – Boston route which was launched on 22 April 2012, using one of JAL’s new 787s. The growing fleet of 787s will also be used to launch new non-stop service from Narita to San Diego (on 2 December with four weekly flights), and to Helsinki (next February, also with four weekly flights).