Montree Jumrieng, Thai Airways’ EVP Technical Department (centre), travelled to Toulouse for the official handover of the airline’s first A380. Thai Airways is now the eighth worldwide operator of the superjumbo.

Boeing remains in the lead of the 2012 delivery race and even managed to considerably increase the gap over Airbus during September as it delivered more aircraft than the European air framer for the second consecutive month. While Airbus’ narrowbody deliveries remained unchanged compared with September 2011 and the European air framer only increased the number of widebodies delivered by one unit, Boeing increased its single-aisle deliveries to 37 from 32 last September, and more than doubled the number of widebodies delivered.

Following the weaker months of July and August, when 92 and 86 aircraft were delivered, the world’s airlines received a total of 97 units from both manufacturers in September, placing it above this year’s monthly average. The yearly improvement however is significant, as a total of 16 more airframes were delivered in September 2012 than in the corresponding month of 2011. On 25 September, officials from Air China and Airbus jointly celebrated the delivery of the 100th China-manufactured A320. The delivery from the Airbus Tianjin Delivery Centre comes just over three years after the first aircraft was delivered in June 2009. 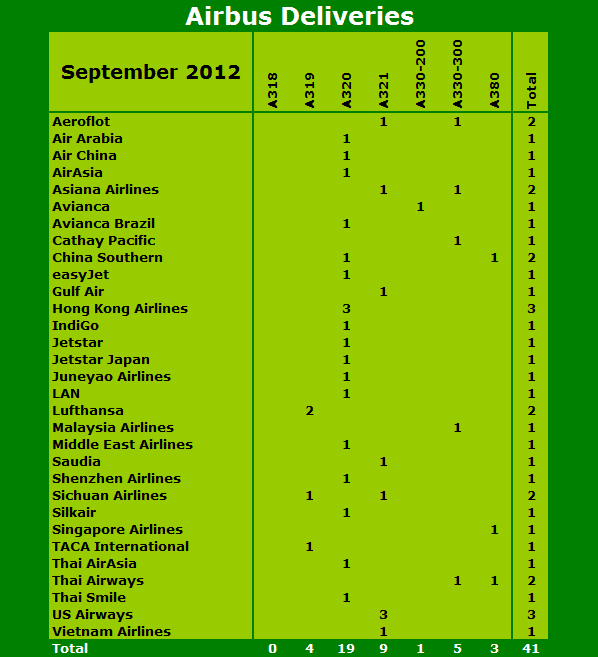 Airbus closed the month with a total of 41 delivered units, which is three aircraft more than in August 2012, and one unit more than in September last year.

Once again, deliveries in September were led by the A320 family, with a total of 32 of these single-aisle jets provided to airlines worldwide. Hong Kong Airlines and US Airways were the largest aircraft recipients last month; the Hong Kong carrier took three A320s, while the US airline – which is the largest single operator of Airbus airliners – saw its fleet reinforced by the addition of three A321s. Only two other carriers received more than one A320 aircraft last month – South American LAN, which took two A319s, and China’s Sichuan Airlines, which had each one A319 and A321 join its fleet. This year to date, Airbus has delivered 317 single-aisle airframes, seven more than its American rival.

Nine widebody aircraft were delivered by Airbus in August, a considerable improvement on the low August output. Notably, China Southern and Singapore Airlines took the delivery of each one A380, as did Thai Airways, the latest airline to receive the superjumbo. Thai Airways was also the only carrier to receive more than one widebody aircraft, as it also incorporated one A330-300 in its fleet. 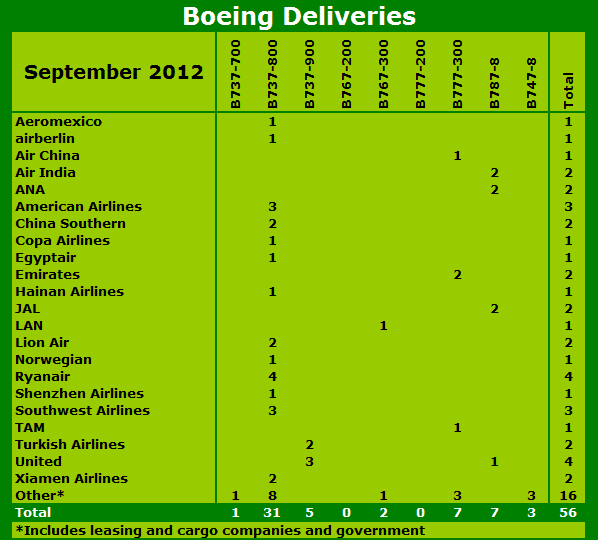 Boeing closed August with a total of 56 units delivered, eight more than in August, and exactly 15 more than in September 2011.

Airlines received a total of 37 narrowbodies from the American air framer, five more than in the preceding month. Notably, a number of airlines received more than one narrowbody unit from the American manufacturer. This includes A320 recipients Ryanair (four units), American Airlines, Southwest Airlines (three each), China Southern, Lion Air and Xiamen Airlines (two each), as well as United and Turkish Airlines, which respectively took the delivery of three and two 737-900s.

Three more widebody units were delivered in September than in August, and the American air framer more than doubled its year on year performance, as it delivered ten units more than the nine units of September 2011. Similarly to the previous month, there were two new 787 operators; Air India and United received two and one 787-8 respectively, while further two units were delivered to each ANA and JAL, which now operate 15 and six Dreamliners respectively. For a fourth consecutive month, Emirates was the only other airline to receive more than one widebody aircraft from Boeing, taking two 777-300s, which brought the number of the aircraft type operated by Emirates to 47. Notably, no 747-8I was delivered in September. 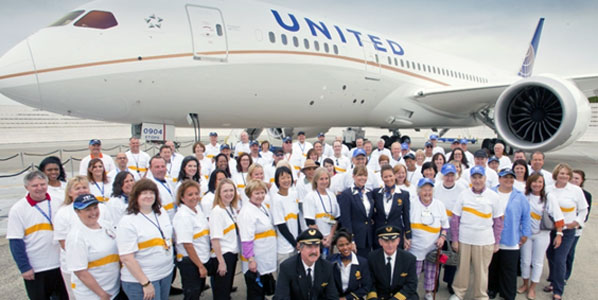 United’s employees had a group shot made in celebration of the arrival of the airline’s first 787.