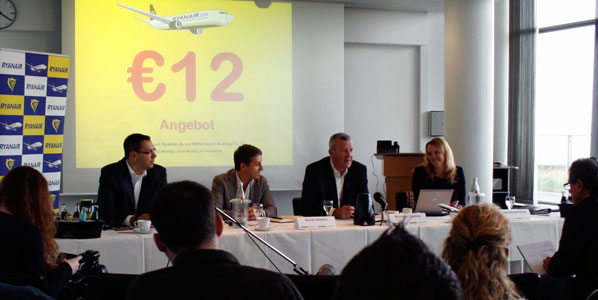 Although easyJet downsizes its network in Dortmund in western Germany, Ryanair last week announced six new routes to Dortmund from next summer at the press conference held by Dortmund Airport’s Bernd Ossenberg, COO, and Guido Miletic, Marketing and Sales Manager, along with Ryanair’s Michael Cawley, COO, and Henrike Schmidt, Sales and Marketing Manager.

Ryanair’s recent announcement that it will launch six routes next summer to Dortmund represents the first time that the airline has operated at the airport that serves the city that is home to the football team that has won the German Bundesliga in each of the last two years. It has revealed plans to start flights from Alghero in Italy, Faro and Porto in Portugal, and Girona, Malaga and Palma de Mallorca in Spain.

This will help compensate for the fact that the airport is losing four of the five routes that easyJet still operates from the airport. The UK LCC had opened its second German base (after Berlin Schönefeld) at Dortmund in July 2004, but stopped basing aircraft there at the end of the summer 2008 season. This explains the spike in passenger numbers at the airport between 2005 and 2008. In total, easyJet has served 16 destinations at one time or other, but this winter only its London Luton service will remain. The dropping of its routes to Barcelona, Budapest, Palma and Thessaloniki represents around 10% of the airport’s summer capacity. 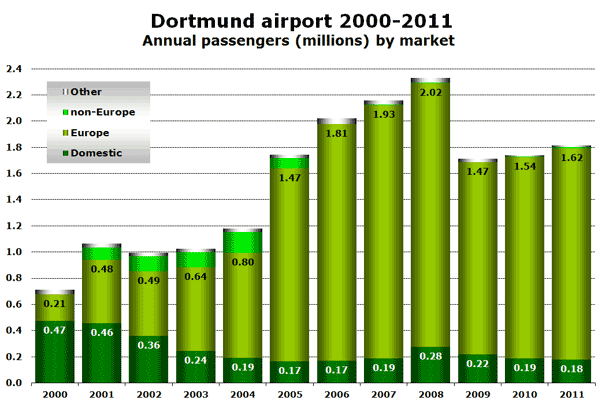 Passenger numbers in the first eight months of this year are up over 9%, well above the German airport average of just 2.1%. New routes started this year include Wizz Air to Budapest (in January) and Lviv (in March), with a new twice-weekly service to Skopje in Macedonia due to start shortly at the beginning of the winter season. 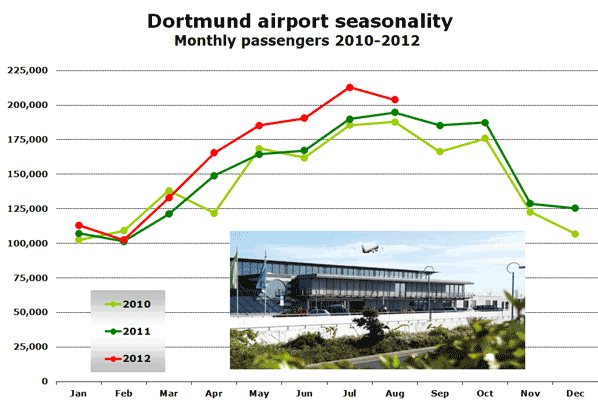 While Palma de Mallorca is the airport’s busiest route based on passenger figures for 2011, the rest of the top 12 routes contains no less than seven destinations in Central Europe (shown in light green), all operated by Wizz Air, which is by some distance the busiest airline at the airport and serves 16 destinations across Central Europe.

Lufthansa’s soon to be much bigger in-house LCC germanwings only operates one route year-round (to Munich) plus summer seasonal routes to Istanbul (Turkey), Palma (Spain) and Split (Croatia). airberlin also has a minimal presence at the airport with Palma being its key route. 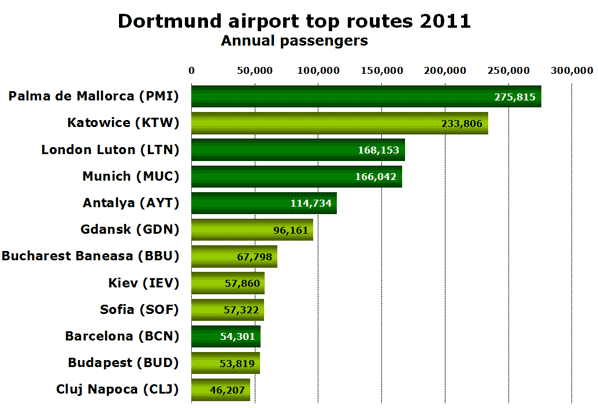 In the last 18 months, Wizz Air has been the only airline to introduce significant new services from the airport with the addition of flights to Targu Mures (May 2011), Vilnius (July 2011), Budapest, Lviv and soon Skopje. easyJet’s last new route launch at the airport was Zagreb in February 2011, but this service was dropped in mid-May of this year.