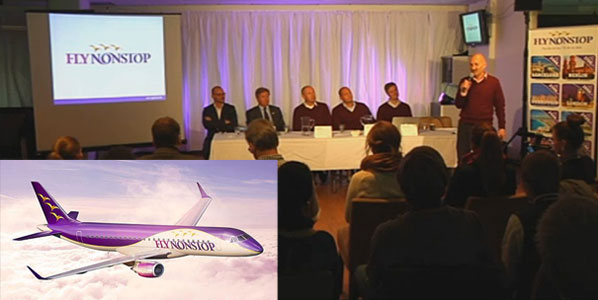 Yesterday, on 16 October, a new, privately owned premium airline was announced in Kristiansand, Southern Norway. With a single 100-seat E-190 aircraft, the new airline FlyNonstop is set to launch operations on 25 April 2013. The founder and owner, Espen Hennig-Olsen, is a local Kristiansand businessman in the ice cream business, while the airline’s Swedish CEO Daniel Lundberg contributes with aviation experience from Viking Airlines and Air Sweden.

Notably, the airline will launch the only route between Norway and London City Airport, which will be served five times weekly, reduced to three weekly flights during the summer peak holiday season. In total, eight destinations have been announced – London City, Paris CDG, Barcelona, Palma de Mallorca, Nice, Parma, Berlin Tegel and Dubrovnik – with the lowest fare offered being €250 return.

Kristiansand airport to handle one million passengers in 2012?

With a population of only just over 80,000 people, the Kristiansand municipality is the fifth biggest in Norway. The airport serving the city at Kjevik handled 952,467 passengers in 2011, an increase of 13.6% on 2011 (Source: Avinor). Of these, 680,771 were on domestic flights and the remaining 271,696 were on international flights. In the first nine months of this year, passenger numbers are up a further 9% with domestic and international traffic growing at much the same rate. This means the airport is on track to pass the one million mark for the first time in 2012. In September, over 100,000 passengers passed through the airport flying on the following routes.

Over half of all weekly seat capacity is on flights to the Norwegian capital, Oslo. The only international destinations served at least daily year-round are Amsterdam and Copenhagen.