Macedonia to welcome flydubai and Wizz Air base Skopje has only baked one cake to welcome a new route so far this year, but the rest of this month will be busy as flydubai arrives and Wizz Air establishes a base at the Macedonian capital airport.

Macedonia, sometimes referred to as the Former Yugoslav Republic of Macedonia (FYROM), is home to two international airports; Skopje Alexander the Great Airport that serves the country capital and the smaller Ohrid St Paul the Apostle Airport, serving the World Heritage Site city by Lake Ohrid. Both are run by TAV of Turkey. 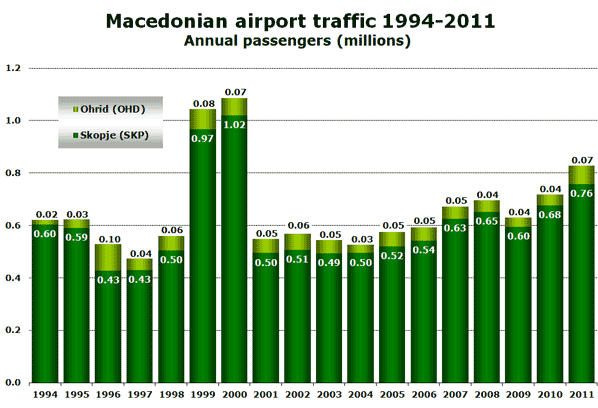 If excluding the years 1999-2000 when Macedonian airports experienced considerable traffic increases because of conflict in neighbouring countries, passenger figures in Skopje reached record levels last year. Since 2003, the airport has only seen its growth trend interrupted one year, in 2009 when Macedonia’s flag carrier MAT Macedonian Airlines suspended operations. Meanwhile, Ohrid has also seen positive development and doubled its passenger throughput between 2009 and 2011.

Ohrid currently has only one scheduled commercial route; a weekly service on Hello from Zurich. Corendon’s last Amsterdam flight for the season operated yesterday, with the airline again returning with five weekly frequencies in May. During summer, Ohrid also had Arkefly compete with Corendon on the Amsterdam route, while Jetairfly served the airport from Brussels via Skopje and Jat Airways operated from Belgrade. 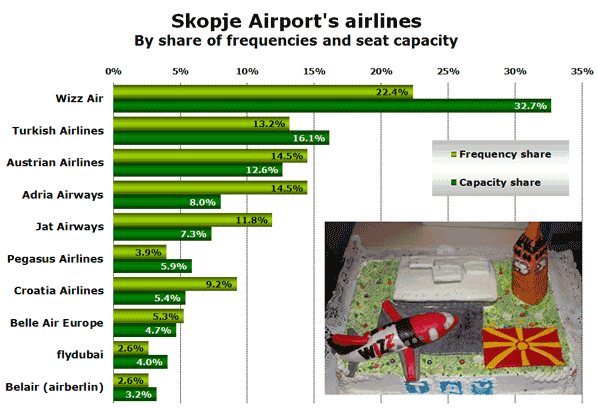 Macedonia’s flag carrier MAT Macedonian Airlines suspended operations in 2009 and the privately owned successor, MAT Airways, closed down last year. Ever since, the country has been left without a locally based airline. However, at the start of the winter scheduling season, Wizz Air will establish a base in Skopje, basing one 180-seat A320 aircraft and instantly becoming the airport’s biggest airline with almost a third of total seat capacity. Prior to the base opening, Wizz Air served Skopje with two routes; from London Luton and Venice Treviso.

Another new entry to the Skopje market is that of flydubai, which will launch its twice-weekly flights from Dubai tomorrow (18 October). The airline will overtake only airberlin’s Swiss subsidiary Belair and rank as Skopje’s second-smallest airline. Notably, flydubai’s links with Emirates creates connection opportunities in Dubai, not the least to and from Australia, which is home to a considerable Macedonian community.

The table below summarises routes launched or announced to launch from Skopje this year. 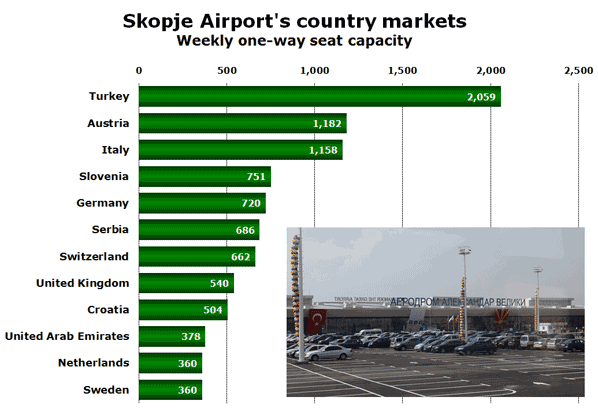 In addition to the airport being Turkish-run, Skopje’s biggest country market is Turkey through Turkish Airlines’ 10 weekly flights from Istanbul Atatürk and Pegasus Airlines’ three flights a week from Istanbul Sabiha Gökçen.

The other country markets served with more than one airport are Italy – served through Ancona, Milan Bergamo, Rome Fiumicino and Venice Treviso – and Germany, which is served through Dortmund and Memmingen.