Single market: Yet more big countries, like Italy and Poland, could soon go the way of Spain and become Ryanair-dominated.

As a truly pan-European airline, Ryanair not only operates flights from 27 European countries (plus Morocco), but has also established aircraft and crew bases in 12 of them. For all its rows with the EU, it has been a massive beneficiary of the EU’s Single Market which means it has very limited exposure to Irish economic problems. However, while the airline awaits the EU’s verdict on its latest attempt to take control of Aer Lingus, anna.aero has taken a look at which European countries Ryanair is already the biggest airline in terms of weekly seat capacity. 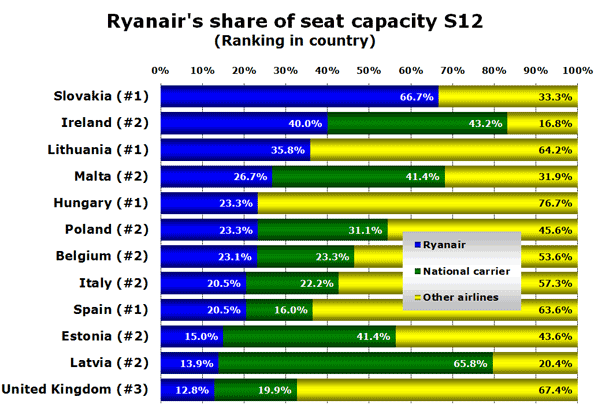 Based on seat capacity analysis of the peak summer month of August, Ryanair offers more weekly seat capacity than any other airline in Hungary, Lithuania, Spain and Slovakia – of these markets only Spain still has a functioning national carrier. In Slovakia, Ryanair accounts for two-thirds of all scheduled seat capacity, having taken advantage of the demise of SkyEurope in the summer of 2009. However, Bratislava is not one of Ryanair’s designated bases; it merely serves the airport from many of its other European bases.

The acquisition of Aer Lingus, based on current capacity, would give Ryanair control of over 80% of the Irish market, although part of its submission to the EU has focused on how it would encourage and support other airlines to enter various routes to reduce its dominance.

anna.aero’s recent look at the route implications of the Ryanair takeover of Aer Lingus also suggests that, as half of Aer Lingus’ routes overlap with Ryanair, rationalisations stemming from the combination would reduce Ryanair’s dominance of Dublin to something around 65% of all seats – still more than the dominance of Air France at Paris and Lufthansa at Frankfurt – but strategically far less important than the command of these big European hubs in global terms.

Bigger than Wizz Air in Hungary, Lithuania and Poland

The demise of another Central European airline, Malév, earlier this year created a further opportunity for Ryanair to become a key player in the Hungarian market. Despite being the birthplace of Wizz Air, Ryanair has managed to become the #1 airline in terms of weekly seats in just a matter of months of the opening of its Budapest base. Lithuania, another country without a national carrier, is another market where Ryanair is now #1 thanks to the creation in May 2010 of a base in Kaunas. Wizz Air’s operations in the country are about half the size of Ryanair’s.

Although London Stansted remains Ryanair’s single biggest base, the airline’s share of the UK market is a relatively modest 13%, beaten by both British Airways and easyJet. However, Ryanair is now the #1 airline in Spain, Europe’s second biggest air travel market after the UK as Ryanair’s 20% market share beats Iberia’s 16%.

Yet more big countries look like they will soon be Ryanair-dominated: In Poland, the opening of new airports at Modlin and Lublin looks set to propel Ryanair within touching distance of LOT as the country’s leading airline, despite the fact that Wizz Air also has a significant presence in Poland with bases at Gdansk, Katowice, Poznan, Warsaw Modlin and Wroclaw. But in volume terms, if success is measured in terms of dominance (and to be fair it probably isn’t at Ryanair), the next major conquest will be Italy, Ryanair’s second-biggest market, where a shrinking Alitalia is less than two points ahead of Ryanair with a 22% seat share.