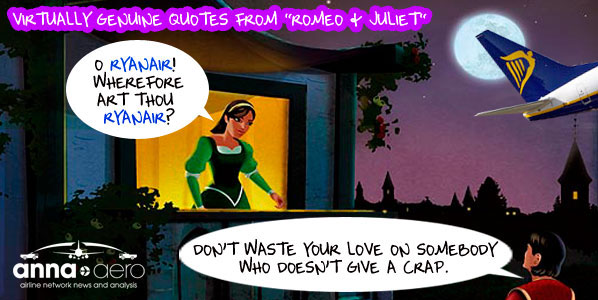 The quotes of star-crossed lovers (a relationship broken up by outside forces; this time the European Commission): Ryanair’s Michael Cawley – "We sincerely regret Verona Airport’s decision to renege on its contractual agreement with Ryanair.” Paolo Arena, President of Verona Airport – “It will be easy to recover within the next season.”

At the end of last week Ryanair withdrew all of its 11 routes to Verona Airport in Italy. The services that Ryanair has dropped are summarised in the following table:

Ryanair has also served Verona in the past from its German bases at Bremen (2007-2008) and Frankfurt Hahn (2006-2008). Based on schedule data for this August, Verona airport was served by 26 scheduled airlines offering some 300 weekly departures. Ryanair accounted for 13% of flights, almost 19% of seat capacity, and ranked second behind Meridiana fly who were responsible for just over 20% of seats spread across nine routes (with two-thirds of this capacity allocated to just three domestic routes; Cagliari, Catania and Olbia).

Meridiana fly was also the quickest to respond to Ryanair’s decision by launching flights to London Gatwick and Palermo from 12 October. Another airline to react was Volotea which revealed plans to start service to Bari (in December) and Palermo (from next March).

Ryanair says it was Verona’s fault

Ryanair’s Michael Cawley said: “Ryanair sincerely regrets Verona Airport’s decision to renege on its contractual agreement with Ryanair. Ryanair will now close all 11 of its Verona routes with the loss of 39 weekly flights. Sadly, over 500,000 passengers per annum and over 500 ‘on-site’ jobs will be lost at Verona while Ryanair will continue to grow at low cost airports which work with us to deliver the low fares required to keep passengers flying.”

Paolo Arena, President of Verona Airport, said: “We confirm that negotiations have been concluded, releasing Verona Airport from an agreement which had no financial feasibility, and is consequently under investigation by the European Commission for State Aid. The airport tried to renegotiate the contract at market conditions and in line with European Community regulations which, in addition to guaranteeing profits for Ryanair, would have required a financial sustainable and economic development for the airport and the surrounding territory. The renegotiation was a solution which the airline had assessed as not feasible for them. Passenger traffic of 490,000 passengers which Ryanair developed in 2011 was 60% domestic and is therefore easy to recover within the next IATA season. We have already seen in the past few weeks announcements for new flights from Verona by Meridiana fly and Volotea on the routes that Ryanair had previously operated. A testimony to the dynamic nature and importance of the city of Verona as a top Italian destination. The vivacity and determination of other carriers to add new flights which are being proposed for the next summer  season also confirms the appeal Verona has internationally.”