Pardubice Airport, 100 kilometres from Prague, is planning the construction of a new terminal. It may currently be needed to expand the existing facilities, but if liberalisation of the Czech-Russian bilateral allows more airlines to access Prague Airport to and from Moscow, will there be enough demand left at Pardubice, which has become a secondary airport for Russian traffic to the Czech capital?

Russia and the Czech Republic recently renegotiated the air services agreement between the two countries and the new bilateral is expected to take effect in the second half of next year. The key development is that a second airline from each country can be designated to fly between Moscow and Prague.

Aeroflot and Czech Airlines have so far enjoyed a duopoly between Prague and Moscow, where both SkyTeam partners have operated to and from Moscow Sheremetyevo with approximately half of the total capacity offered by each airline. Czech Airlines currently operates 32 flights a week, and Aeroflot 28 weekly frequencies, i.e. four flights a day. 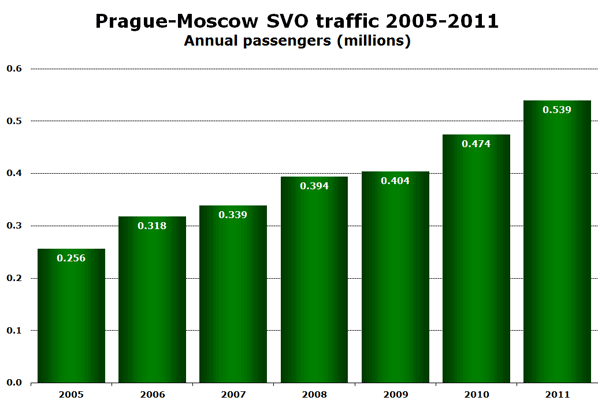 At Prague Airport, the fast growth of this route means that it has now risen to be the airport’s second-biggest in terms of passenger numbers, only being beaten by the #1 route to Paris CDG that had over 830,000 passengers last year. In four of the last six years, the Moscow route has grown at double-digit rates and the development is also positive so far in 2012, with another double-digit growth expected at the end of the year.

With such strong increases in passenger numbers limited to only two carriers and only one Moscow airport, it appears that not even strict Russian authorities have been able to resist allowing more carriers to compete. However, airlines eager to enter the route have already taken drastic measures. Prague, which does not ordinarily have secondary airports, has seen traffic to and from Russia spill to other Czech airports. 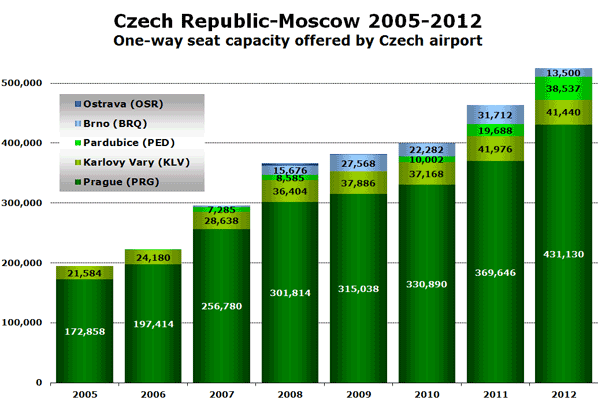 Although Brno and Ostrava serve eastern Czech Republic, Karlovy Vary and Pardubice are only located around 100 kilometres from Prague and both airports are dominated by Russian traffic. Karlovy Vary Airport has been served for some time from Moscow by the same two airlines that operate the route to Prague. Czech Airlines and Aeroflot currently operate to and from Moscow Sheremetyevo four times weekly and twice a week respectively, but the Czech national airline’s frequencies are reduced to three weekly flights in winter.

It is at Pardubice that other airlines have been able to enter the market. Currently, Transaero operates to the Czech city from Moscow Domodedovo, but these five weekly flights are set to move to Moscow Vnukovo at the start of the winter scheduling season later this week.

Now defunct Czech Connect Airlines, which specialised in serving Russia from Czech regional airports, also operated between Pardubice and Moscow Domodedovo from October last year to the airline’s grounding in January this year.