easyJet’s latest new route from Belfast International is the domestic route to Birmingham that launched at the beginning of this week. Although its international network from the Northern Ireland airport is slightly bigger than the number of domestic destinations offered, more than three quarters of frequencies are to other UK airports.

This week sees the launch of easyJet’s first ever domestic route to Birmingham Airport with the introduction of daily flights from the airport’s base at Belfast International. easyJet has been operating at Belfast International since September 1998 and has, at one time or another, served a total of 30 destinations non-stop from the Northern Ireland airport. The number of destinations served each season has hovered around the 20 mark since the summer of 2005, but although the number of weekly flights has picked up in recent seasons, easyJet is still flying around 10% less at the airport than it did between 2005 and 2008. 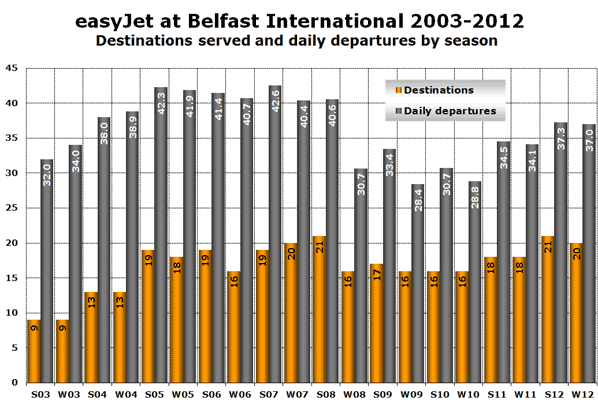 This winter, easyJet will be operating around 260 weekly departures, but there is considerable variation by day of week. On Mondays, Thursdays and Fridays, there are between 43 and 45 daily departures, but this falls to 29 on Wednesdays, and just 26 on Saturdays.

Domestic routes account for three in every four flights

A total of 23 destinations are currently on sale, which includes 11 year-round domestic routes, and 12 international destinations, of which four (Geneva, Ibiza, Nice and Palma de Mallorca) are only operated seasonally. Over three-quarters of all flights are to UK destinations, with Spain the most popular international market.

Aer Lingus will be ending flights from Belfast International at the start of the winter season and refocusing its operations in Belfast at Belfast City airport, leaving Jet2.com as easyJet’s main rival at the airport. Indirect competition comes from Flybe, which operates an extensive domestic network from Belfast City, as well as serving Paris CDG.