Although Turkish Airlines is the main contributor to Istanbul Atatürk Airport being Europe’s fastest-growing major airport, other airlines are also contributing to the growth. The home carrier’s Star Alliance partner United began operating from Newark on 1 July, becoming one of 58 airlines to serve Istanbul Atatürk this winter.

For some time now, Europe’s fastest growing major airport has been Istanbul Atatürk Airport, home of Turkish Airlines, Europe’s fastest-growing flag carrier. Last year, the airport handled 37.4 million passengers, ranking it eighth in Europe, and in the first eight months of 2012, it has already passed both Munich and Rome Fiumicino airports to take sixth place behind only the FLAP airports and Madrid.

Just ten years ago, the airport was handling just over 11 million passengers, but since then, growth has been rapid with double-digit growth in five of the last nine years, including 16% growth in 2011. Between 2002 and 2006, growth was fastest in the domestic market which tripled in size from under three million passengers to over nine million, while international traffic grew by a more modest 43%. However, in the last five years, the domestic market has grown by just under 50% while international traffic has almost doubled from 12 million passengers to almost 24 million. 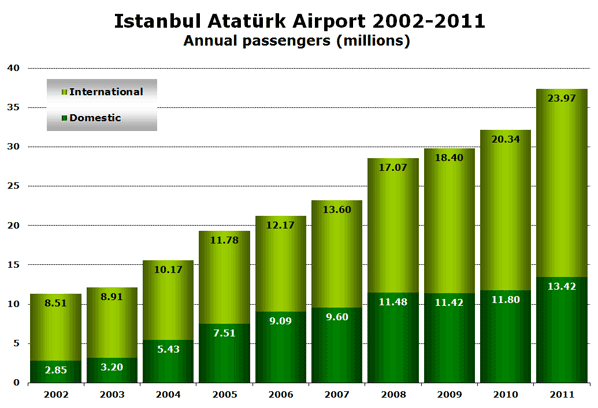 So far this year, the rapid rate of growth shows no sign of slowing down with total traffic up 21% in the first nine months of this year; domestic traffic is up 14% while international demand has grown by 24%. At this rate, the airport may even pass Madrid for fifth place in 2013. 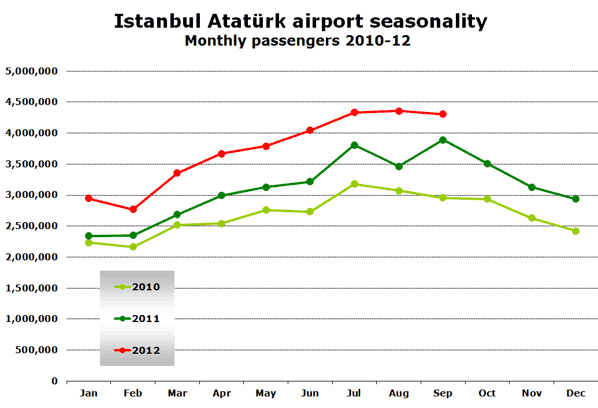 Although Turkish carriers dominate traffic at the airport, other airlines have also launched flights in the last 12 months, notably Air France which has introduced flights from Marseille (last October) and Toulouse (3 April), and United Airlines which began daily flights from its Newark base on 1 July. Lufthansa, another Star Alliance member, launched flights from Berlin Tegel in June, although these were planned on the basis that they would be operating from the new Berlin Brandenburg Airport.

This winter a total of 58 airlines will be operating scheduled flights from Istanbul Atatürk Airport of which 33 serve the airport with at least daily flights.