Nantes reaches 3 million passengers earlier than ever; Ural Airlines touches down in Budapest 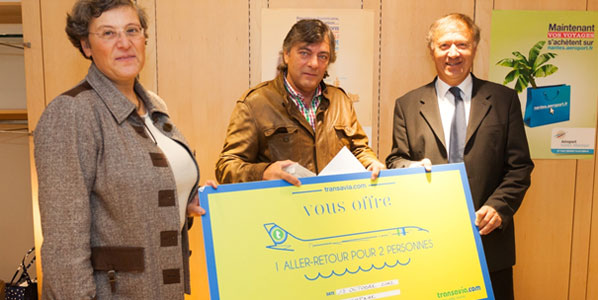 Nantes Atlantique Airport has welcomed its 3-millionth passenger of the year. The airport in western France for the first time reached this milestone in December 2010 and continued passenger growth means that it was reached in November last year – and now in October. By the end of this year, the airport is expected to reach 3.55 million passengers. Celebrating were Hélène Abraham, VP Commercial Marketing and Products of Transavia.com France; Jean-Pierrre Vempaire, the lucky passenger; and François Marie, Nantes Atlantique Airport Manager. Vempaire is a regular passenger on Transavia.com’s route to Porto because of business in northern Portugal and Spain. We now have photos from the launch of  Ural Airlines’ new route to Budapest  – and what a cake! The Ural Mountains-themed cake was cut by Alexei Fomin, Ural Airlines’ Quality Director, and Kam Jandu, Budapest Airport’s Aviation Director. Passengers were welcomed to the Hungarian capital with bread and salt – a Russian tradition – while the crew got their very own cake from Jandu.