Peach may have launched two new routes in the last week – one international and one domestic – but Jetstar Japan is still the biggest of the three new low-cost airlines to launch in Japan this year. Combined, Jetstar Japan, Peach and AirAsia Japan have a 4% capacity share of the domestic market.

Latest traffic data (for August) for Japan’s two biggest airlines (ANA and JAL) confirms that underlying demand for domestic travel on these two carriers is around 8% down compared with two years, while international demand is down around 5%. This is consistent with previous months, although the earthquake/tsunami of early 2011 means that simple comparison with data from 2011 can be misleading. It is also worth noting that compared with six years ago, domestic and international demand combined for these two airlines is down around 20%. Most of this decline has occurred at JAL where passenger numbers have fallen from 5.5 million in August 2006 to just 3.6 million in August 2012. By contrast, ANA’s passenger numbers have remained virtually unchanged at around 4.8 million passengers, although it too has seen domestic passenger numbers fall slightly, but managed a 50% increase in international passengers to over 600,000 in August. 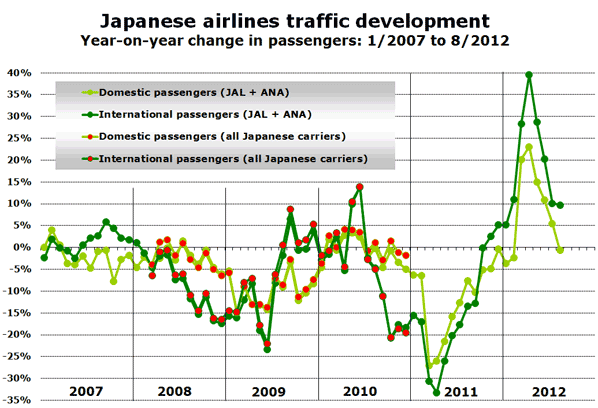 Domestic capacity up 6.5% this winter

Schedule data for November indicates that the arrival into the domestic market of three new well-funded and supported LCCs has pushed year-on-year capacity up by 6.5%. Jetstar Japan currently leads the way among the newcomers with 1.7% of the market, followed by Peach (1.2%) and AirAsia Japan (0.7%).