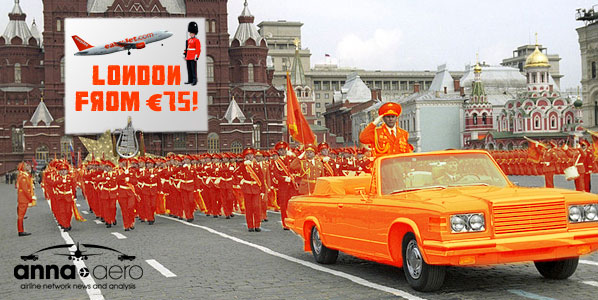 Orange Square: The UK CAA decision to award the route to easyJet at Gatwick is a nasty shock to the favourite, Virgin Atlantic, and further reduces the dominance of London Heathrow.

London Gatwick Airport’s biggest and fifth-biggest airlines, easyJet and Norwegian, are announcing big developments from spring 2013. A surprising development at the London airport will be easyJet’s introduction of a route to Moscow Domodedovo after the low-cost airline won the bid over favourite contender Virgin Atlantic as well as British Airways. The generally highly regulated Russian market has only really seen European low-cost traffic of note from Germany, Spain and Italy where germanwings and Vueling serve Moscow airports and WindJet did so prior to its demise.

This is the second route to Russia from London Gatwick after Aeroflot/Rossiya’s St Petersburg service. In the same way that all three Moscow airports will offer flights to London from the start of the winter scheduling season at the end of this week, the UK CAA decision to award the route to easyJet at Gatwick reduces the dominance of London Heathrow by giving Moscow access to another London airport and its catchment area, but the decision not to go for Virgin Atlantic at the same time further erodes Heathrow’s hub status.

Although easyJet’s 360 daily seats in each direction on the route is more than Transaero’s 285 daily seats offered, Virgin Atlantic would still have offered slightly more seats in economy class, as well as premium cabins.

In its announcement of the new route, easyJet highlights its lowest fare of £125/€155 return – roughly the same cost as for a British citizen to obtain a visa for Russia – as its key selling-point and that is a fair bit lower than other airlines offer on non-stop services. Although non-stop return flights in anna.aero’s experience rarely have been seen for less than £200/€250, passengers have for long been able to fly between the London area and Moscow with a transfer from around £150/€185 on Lufthansa Group airlines. anna.aero also sees a key difference being easyJet’s one-way fare structure, which eliminates restrictions such as Saturday night stay requirements.

At 2,550 kilometres, the route is no longer than many of easyJet’s routes to the eastern Mediterranean, but the added complexity of the need for easyJet to codeshare with a Russian carrier makes the announcement an interesting development well worth following.

Norwegian’s new ‘home’ base at Gatwick 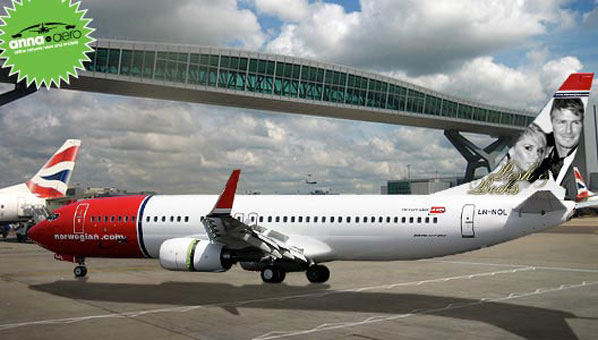 Ever since Norwegian put in orders for 200 aircraft, there has been speculation about whether its home market, the Nordic countries, could sustain such an expansion.

Norwegian, which already serves Gatwick from 10 airports in Norway, Sweden, Denmark and Finland, will be basing three of its 737-800s at the airport, increasing to four based aircraft before the end of 2013. What makes this base different from its other non-Nordic bases in Malaga, Las Palmas and soon also Alicante is that the low-cost airline intends to not only benefit from lower labour costs while still serving only Nordic markets, but Norwegian has announced that it will serve ‘Mediterranean destinations’ non-stop from the London airport.

Indeed, there has been speculation ever since Norwegian put in orders for 100 737 MAX 8 and 100 A320neo about whether the airline’s de facto home market, the Nordic countries, could sustain such an expansion and representatives from Norwegian have repeatedly referred to the airline’s home market as ‘Northern Europe’ when talking to anna.aero. Still, the move into Gatwick is bold. easyJet is very strong at the airport and there are many other airlines wanting a piece of the Mediterranean market; British Airways, Monarch, Thomas Cook and Thomson to name a few. Aer Lingus famously tried and retracted. But Norwegian also just reported record profits and may be better able to compete with some smaller, potentially financially troubled players in the London market.