Two decades of KLM services were celebrated at Kiev Boryspil Airport in Ukraine with a glamorous cake by AF-KLM's Station Manager, Anna Boychuk; and Natalia Dzhevaga, the airport's Head of Passenger Handling (both pictured centrally in the group photo). The Dutch airline currently offers twice-daily flights from Amsterdam to the Ukrainian capital. 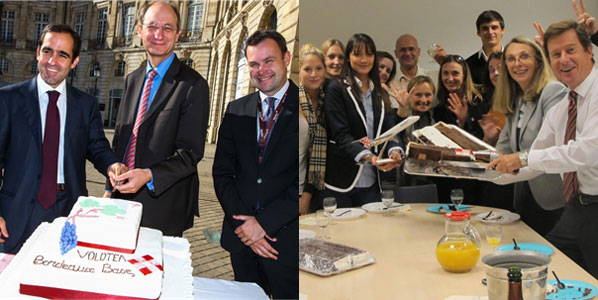 In downtown Bordeaux, with the 18th century building of the Chamber of Commerce in the backdrop, cutting the inaugural cake for Volotea’s new base launch announcement in Bordeaux were Carlos Muños, the airline’s CEO; Pascal Personne; Bordeaux Airport’s CEO; and Edo Friard, Volotea’s Commercial Director France. Back at the airport, Jean-Luc Poiroux, Bordeaux Airport’s Commercial Development Director, celebrated together with his development team. Alitalia’s transfer to Terminal D was celebrated at Kiev Boryspil on 28 October with a cake-cutting ceremony performed by: Vladimir Semenchenko, GM Swissport Ukraine; Oleksandr Cherepanov, the airport's Operational Director; and Alitalia's Station Manager, Alla Reshetnyk. Terminal D, which was completed in May 2012 in the wake of the EURO 2012 football games, is the largest one in Ukraine and can service up to 15 million passengers per year; its area is 107,000 square meters. Air Cote d’Ivoire, the joint venture between the Government of Ivory Coast, Air France and the Aga Khan Fund for Economic Development, presented its two A319s on 23 October at Abidjan Airport. Ivorian President, Alassane Ouattara, disclosed: “The flights will begin in a few weeks and I wish the new airline all the success.” Abdoulaye Coulibaly, Air Côte d’Ivoire’s Board Chairman, said: “We will serve ten African capitals in total, with three of them to be launched initially, and expect to carry 300,000 passengers in its first year and create 2,500 jobs.”