In October, LAN received its second 787, although the show was perhaps stolen by the airline’s maiden commercial flight performed with the aircraft type at the beginning of the month.

In October, Airbus managed to make up for some of Boeing’s lead as the European manufacturer had its best month of the year year, delivering 57 air frames – seven more than its US counterpart – and breaking the two-month-long Boeing dominance. While Airbus’ results for narrow-body deliveries increased by seven units compared with October 2011, the European air framer bettered the number of wide-bodies delivered by six units. At the same time, Boeing increased its single-aisle deliveries to 32 from 24 last October, and grew the number of wide-bodies delivered from 14 to 18 units.

After September, when 97 aircraft were delivered, the world’s airlines received a total of 107 units from both manufacturers in October, making it the most productive month this year in terms of deliveries. The yearly improvement is significant, as this is 25 aircraft more than were delivered in October last year. 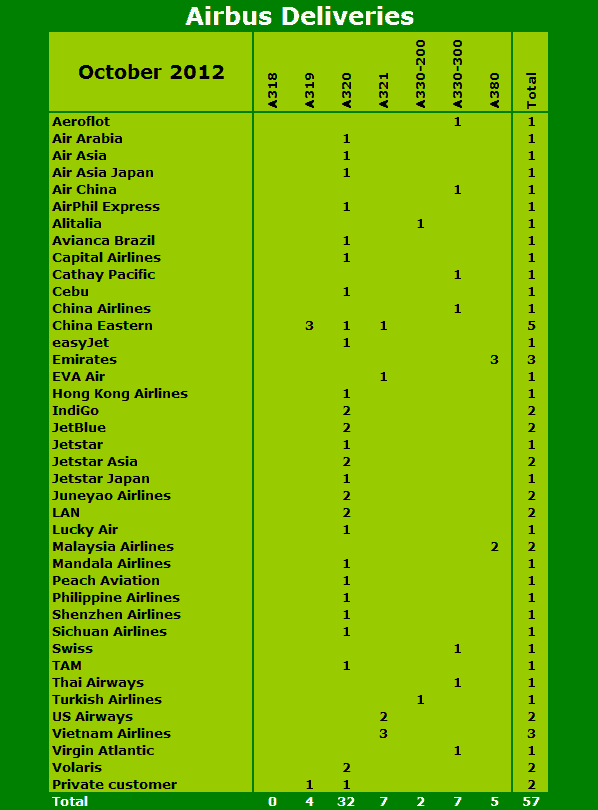 Airbus closed the month with a total of 57 delivered units, which signifies an improvement of 16 aircraft over September, and 13 units more than in October last year.

Once again, deliveries in October were led by the A320 family, with a total of 43 of these single-aisle jets provided to airlines worldwide. Notably, Japan’s three new low-cost airlines Jetstar Japan, Air Asia Japan and Peach were among A320 recipients last month, reaffirming manufacturer’s strong position in the Asian low-cost market. In addition, China Eastern was the single-largest recipient of A320 family aircraft in October as it took three A319s, and each one A320 and A321.

14 widebodies were delivered in October, a number only last achieved in November 2011 and a considerable improvement on the September result, when customers received nine twin-aisle aircraft from Airbus. Remarkably, five (three for Emirates, two for Malaysia Airlines) A380s were delivered in October, marking the highest-ever monthly number of deliveries for the type. Notably, Aeroflot incorporated an A330-300 in its fleet as the 100th Airbus-built aircraft in its fleet. 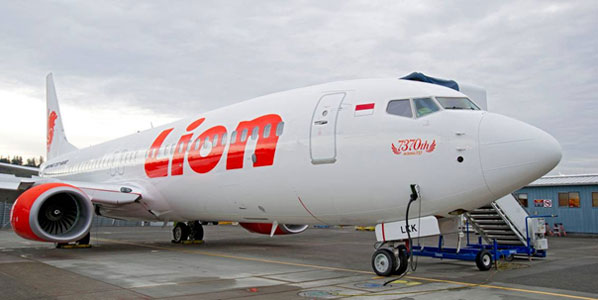 Lion Air received the 7,370th 737 ever to come off Boeing’s production line. The jubilee delivery brought Lion Air’s total fleet of 737NGs up to a total of 75. 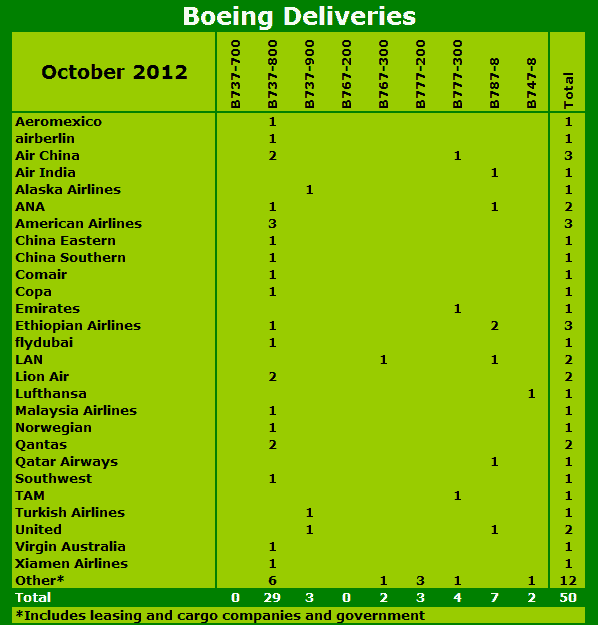 Boeing closed October with a total of 50 units delivered, six less than in the preceding month, but 12 more than in October 2011.

Airlines received a total of 32 narrow-bodies from the American air framer, five less than a month before. Notably, a number of airlines received more than one 737 from the US manufacturer, including American Airlines, which received three units of the type for the second consecutive month; as well as Air China, Lion Air, and Qantas, each of which saw two aircraft join their respective fleets.

Only one less wide-body unit was delivered by Boeing in October 2012 than in September, and the American air framer considerably improved its year on year performance, as it delivered four units more than the 14 units it managed in October 2011.

A whooping seven 787s were delivered to customers in last month, including two for Ethiopian Airlines, and one each for Air India, ANA, LAN, Qatar and United. Other notable wide-body deliveries included a 747-8I for Lufthansa and Air China’s 777-300 in the “Smiling China” livery. The 10th out of Air China’s 19 777-300s ordered with Boeing was delivered in October, featuring a distinctive livery of 40 smiling Chinese faces chosen through a social media competition. Feng Run E, the airline’s VP, said: “We hope this special-livery airplane will bridge the connection to bring a smiling, confident and friendly China to the world.”