Chinese airlines’ latest conquest in Australia is Cairns, and Melbourne will soon welcome its fourth Mainland China carrier, Sichuan Airlines. But where are Australia’s own airlines when Chinese carriers are booming in their home market? 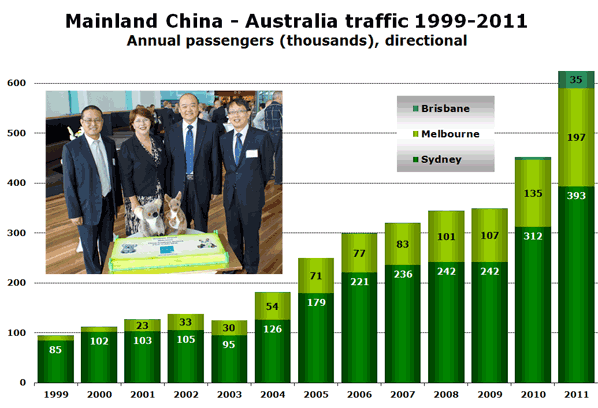 In the last decade, traffic between Mainland China and Australia has boomed and passenger numbers last year were five times higher than 10 years ago. Except for a small dip in 2003, when SARS impacted the market, there has been consistent growth. In addition to the 2004 market recovery, particularly fast growth was recorded in 2005 as well as the last two years; 2010 and 2011. Last year, passenger numbers grew by an entire 39%.

This year, the trend continues. Although Sydney only records 2% growth for the first eight months of the year, the main developments are now taking place at Australia’s other airports. Chinese passenger numbers in Brisbane grew by 43% during the same time period and in Melbourne, which now has considerable traffic to and from Mainland China, growth was 23%.

In November last year, China Southern made Perth the fourth Australian airport to have a non-stop link with Mainland China and China Eastern, which began serving Cairns only two weeks ago, are to be followed by China Southern in December when the airline starts operating some of its Brisbane flights via Cairns on the way back to Guangzhou.

In spite of the boom, there are currently only four airlines operating non-stop flights; China Southern has 48% of scheduled seat capacity, China Eastern 22%, Air China 20% and Qantas 9%. Qantas notably only operates one route – six weekly flights between Sydney and Shanghai Pudong – and the other major Australian carrier, Virgin Australia, is absent in the Chinese market.

The next carrier due to enter the country-pair market, Sichuan Airlines that has announced three weekly flights between Chengdu and Melbourne to launch at the end of this year or beginning of 2013, will be yet another Chinese airline to operate between the two countries, further reducing the Australian flag carrier’s market share.

Business is only the reason for travel for 16% of passengers between the two countries according to a Melbourne market study for the year ending September 2012. Although traffic is directional, with Australian residents only making up 37% of passengers between the two countries as increasingly prosperous Chinese visitors travel to Australia for tourism, VFR and studies, the two Australian carriers appear to be missing out on an opportunity during otherwise difficult times. Qantas to some extent accesses Mainland China through its alliance partners Cathay Pacific and Dragonair via Hong Kong, but its O&D market share is still only 14% according to Australian passenger card data.