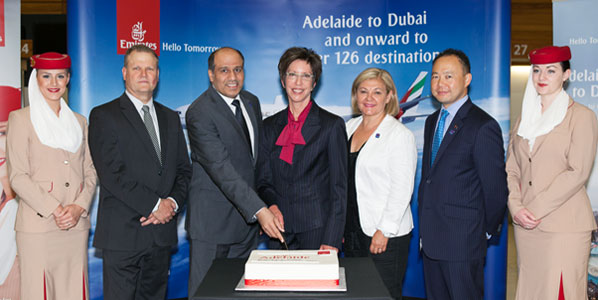 November 1 2012: Emirates becomes the first ‘MEB3’ carrier to serve Adelaide. Initially four times a week, the 777-300ER services are set to go daily in February. The other foreign airlines at Adelaide are Air New Zealand, Malaysia Airlines and Singapore Airlines. It is now the largest airport in Australia without a scheduled service to China.

True to form, Australia’s fifth largest city at 1.2 million is also its  fifth busiest airport in the nation – South Australia capital, Adelaide (ADL). As a result of a 4.6% traffic decline last year, the airport handled just less than 7 million passengers, despite having broken the same barrier in the previous two years. This marks only the second time in the last 15 years that the airport has seen year-on-year passenger numbers decline, with the previous occasion being in 2001. Despite this recent blip, international traffic has doubled since 2003/04, and domestic traffic is poised to break through the 6 million figure again, with double digit seat growth by home-grown low-cost airlines Jetstar Airways (31%), and Virgin Australia (16%), over the last 12 months. 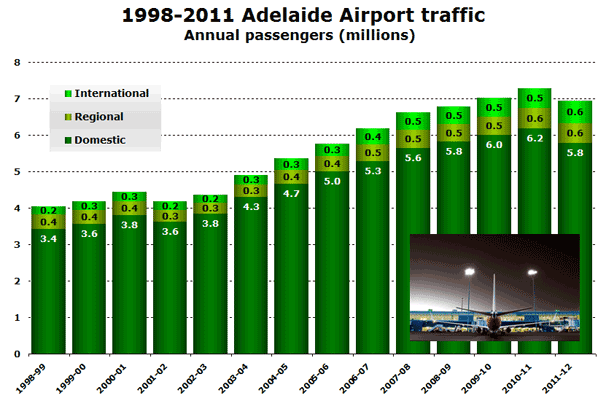 So far in 2012 passenger numbers are unspectacular (-1.7%), with the latest monthly data from August showing marginal growth. However, traffic is expected to pick-up towards the end of 2012, following the recent inaugural flights by Emirates to Dubai (DXB) opening the door to transiting passengers from Europe and beyond as well as Tiger Airways Australia to Melbourne (MEL). Despite Tiger’s arrival on the Melbourne service, all three incumbents on the route – Jetstar, Qantas and Virgin – have reacted strongly by adding their own capacity, seeing the combined potential seats on the city pair jump by 23% since December 2011. Adelaide’s second biggest route measured by seats – Sydney (SYD) – is also posting a robust annual capacity increase too, up 19% in the past 12 months. 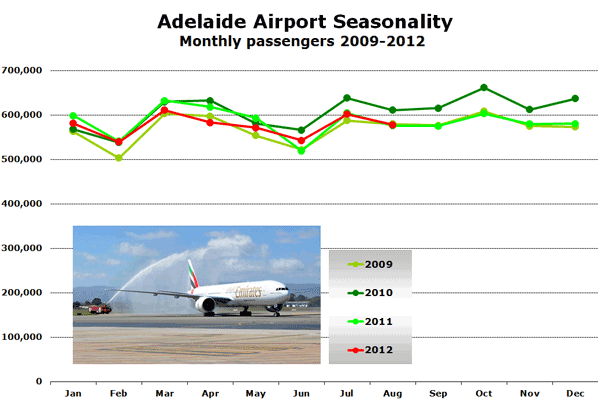 While many airports around the world suffer from peak passenger flows of two or three times the low season throughputs, there are no such issues at Adelaide. Its relatively flat monthly profile is an airport planner’s dream, with no need for expensive peak-season facilities required to accommodate the annual surge in passenger numbers. During the last 12 months of available data, flows peaked at 611,000 during March 2012, but only fell to 539,000 in the previous month, representing a variance in monthly traffic of just 13%. 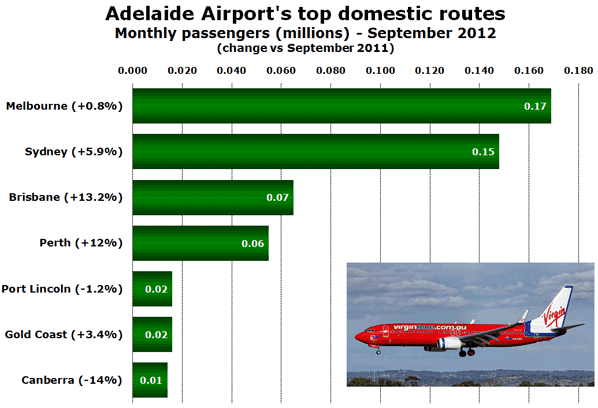 During September 2012, traffic across Adelaide’s main domestic routes has grown by just under 4% since September 2011. Double digit growth in passenger carryings to Brisbane (BNE) and Perth (PER) have been tempered by a similar scale fall on the 972-kilometre route to the Australian capital Canberra (CBR). Virgin has grown its Brisbane capacity by 54% in the last 12 months, while the number of seats operated by the domestic big three to Perth (Jetstar, Qantas and Virgin) have only grown marginally, which indicates most of this route’s (12%) passenger growth has been driven by higher load factors.

Following China Southern Airlines’ new route to Perth from Beijing (BJS), via Guangzhou (CAN), Adelaide is now the largest airport in Australia without a scheduled service to mainland China. This network gap was exacerbated by the withdrawal of Cathay Pacific’s Hong Kong (HKG) service in March. The airport is also bereft of connections to secondary points in New Zealand, with Air New Zealand’s daily A320 service to Auckland (AKL) being the only route in the Trans-Tasman market.