After what seems to be a period of genuine consolidation Oman Air’s only new route in the past year was its September launch to Tehran Imam Khomeini (IKA). Daily flights from Muscat are operated with new E-175s configured with 71 seats.

In its latest published results, Oman Air carried just short of 3.8 million passengers in 2011, up 16% on the previous year, which despite being an impressive double-digit growth figure that many airlines would dream of, fell short of the staggering 38% improvement registered between 2009 and 2010. This means that in the last two years, the Muscat-based carrier has grown by over 60%, driven in part by the delivery of its first Embraer E-175s which have facilitated much of its recent regional network expansion that included the airline’s new service to Tehran Imam Khomeini (IKA) which started on 1 September. 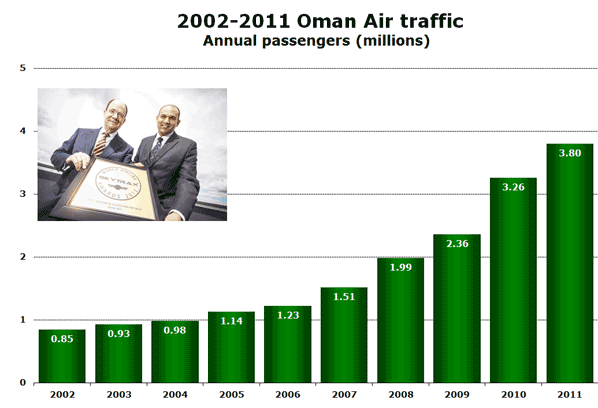 In the last 12 months, the airline’s shape and size has been driven primarily by generic growth on its existing network of routes, with Zanzibar (ZNZ) leading the way. Capacity growth to existing destinations Riyadh (RUH) and Jeddah (JED), as well as Lahore (LHE) and Islamabad (ISB) make up two-thirds of the top six routes in terms of additional seats in December 2012 versus the same month last year. 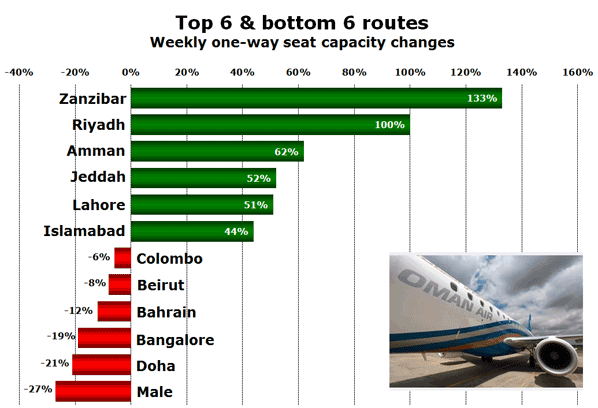 While weekly frequencies have been maintained, the -27% decline of seats to Malé (MLE) has come as a result of the route switching to an all 737-800 service in December 2012 in comparison to one which was predominantly flown by A330-300s in December 2011. The -21% reduction in seats to Doha (DOH) has seen the removal of six weekly frequencies across a mixed operation that includes flights by Oman Air’s 737-700, 737-800 and E-175 short-range fleet to the Qatari capital. Conversely, Qatar Airways has added seven weekly frequencies on the 703km flight, resulting in 7% overall growth in weekly seats on the route pair despite Oman Air’s pull back in capacity.

Oman’s sizeable Indian ex-pat worker community drives the largest country market for the airline with connections to 10 points in India and links to fellow Middle East nations making up nearly half of the Top 12.  Domestic flying to Khasab (KHS) and Salalah (SLL), a market which grew by 13% since last December, makes a surprising entry into the data – by comparison many other Middle East carriers have virtually no domestic routes. Europe breaks into the Top 12 twice, with the airline’s services to Frankfurt (FRA) and Munich (MUC) in Germany and London Heathrow in the United Kingdom. However both markets have seen little or no change in seat capacity over the last year. 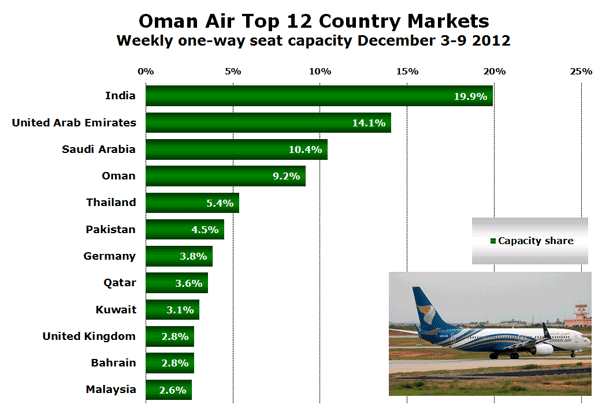 Overall the airline grew its weekly seat capacity by 11% in the past year; a growth figure which, if achieved in terms of passenger numbers, will see the non-alliance aligned carrier break 4 million annual passengers in 2012. While the airline made an operating loss of OMR 97 million ($252 million) in 2011, there is no denying that the annual revenue increase of 25% seems to indicate a sound financial future for the Omani Government-backed carrier.

This is in stark contrast to fellow non-“Middle East Big 3” (MEB3 = Emirates, Etihad and Qatar) member Gulf Air which continues to retrench having this month reduced its Boeing 787 Dreamliner commitment to a maximum of 16 aircraft, eight less than it had originally ordered, as well as taking up to 24 A320neo aircraft instead of the 20 Airbus A330s it had previously selected. 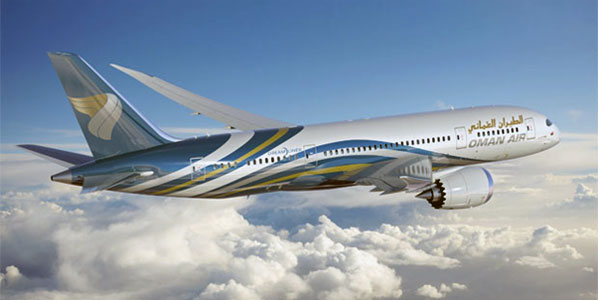 The airline’s future network plans remain unclear, with no new routes announced so far for 2013. However, the airline’s capacity growth is assured with orders for six 737-800s and six 787-8s sitting on Boeing’s books.